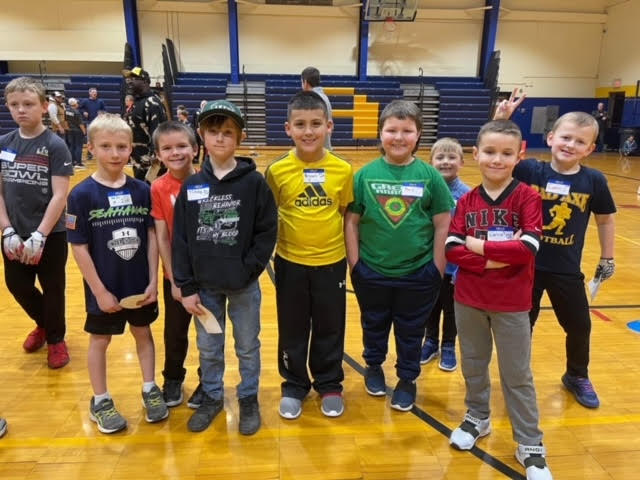 Back to the Roots Football Camp holds clinic in Bad Ax

Recently, Bad Ax schools hosted the “Back to Roots” youth flag football camp. The camp is designed for Upper Thumb youth to learn and hone their football skills.

Hatchets junior football coach Robert Arnott is one of the camp leaders.

“Nobody decides anything,” he said. “We’re a team and that’s what we give our kids. That’s teamwork. We all make decisions together.”

Arnott said it was the first year for this youth organization, which started in mid-February.

“On February 19, Chris Partaka came up to me and said, ‘Let’s start a youth football program and keep it local. “”, Did he declare. “He wanted to keep him in Bad Axe, instead of moving him out of the county. That’s what the fan base wants.”

Arnott said the program had been around for five years before he and other coaches took over.

“A few individuals started it and we had multiple teams in the area,” he said. “A bigger company came along, promising a better way. We weren’t seeing the results. The participation prices were also very high for each child. We took it over. That’s why we call it ‘Back to Roots’ “. .”

Arnott said the $50 entry fee may be lower in the future.

“We’ve only just started,” he said. “If there are families that are on a budget, we have people who will step in and pay for registration for them. There are no hidden fees with our registration, it’s set at $50. Many schools even offer to pay for their students as long as they play. North Huron has done this, and there are smaller schools that have offered to do so as well.

“That’s what ‘Back to the Roots’ football is all about,” he added. “We want every child possible to play. Some children cannot, because of the family budget. For this we have registration waivers available and donations have been made.”

At the recent camp held at Bad Axe, there were three separate agility drills the kids participated in. The first was a 40-yard dash.

“Since we had to bring it inside, it was just a 30-yard dash,” Arnott said. “It’s the length of a basketball court. We put the athletes side by side to push each other. Steve VerBurg, Bad Axe’s new head coach, ran the clock for us, with the “One of the Bad Ax football players. The kids got to do this drill and see Bad Ax football stepping in to help.”

The second was a flag pulling drill, commonly used in flag football.

“We lined up six kids with belts, several feet apart,” Arnott said. “We had our hands out so the runner could step forward and shoot each flag. The object of this drill is to see how fast a kid can shoot a flag from the right side of each person. If they miss it, he has to hurry up, go back and shoot the flag, then move on to the next person.

“The player has to go around each person on the right side, then on the left side,” Arnott added. “It tests a player’s hand-eye coordination, stopping ability and speed.”

The third drill had kids running certain routes in a wide receiver drill. According to Arnott, it shows who can follow the right path, listen and catch the ball.

“Grady Seltz, one of the Bad Ax football players, helped with this exercise,” he said. “He threw the ball to the kids. Us coaches tried to throw a few passes, they were off target. I’m glad Grady stepped in to help us. That’s why we coach, not play.”

Some of the organization’s short-term goals, according to Arnott, are to get kids to push themselves in front of a crowd.

“We also want kids and coaches to be accommodated with each other at a fast pace,” he said. “For coaches, they want to see how kids learn on the fly. The ultimate goal is to have fun with that too.”

Objectives of the Organization

Long-term, Arnott said one of the goals is to get Upper Thumb kids interested in sports and playing together as a team.

“We have kids from Ubly, Bad Axe, Harbor Beach, North Huron, Caseville and small schools interested,” he said. “We want all of our county teams to be equally competitive in the future, instead of one dominant team. We also hope to teach children to work as a team and listen to coaches.”

“Coaches also learn from children,” he added. “That way our regional teams will dominate in the future. We want everyone to cheer each other on as well. As our athletes progress in age and rank, they already know teamwork. They know what it takes to be at their best and off the pitch. It also makes people better for the world.

Bad Ax college football coach Steve VerBurg said the number one goal of camp is to have a good time.

“Everyone had fun, that’s the key,” he said. “Have a good time and have fun. It was cool to see all the kids there, as many as we had. To see them compete, run, catch and all the fundamental skills kids need. I was supporting the youth coaches and helped run their combine that day.I helped in any way I could.

Arnott said another thing camp teaches kids is to never put another player down.

“We teach our players to congratulate themselves and to motivate themselves,” he said. “Good or bad game. For those who don’t wish to continue playing football, they will still learn valuable life lessons. Treat everyone with respect and tell them they are doing a great job.”

Arnott said another lesson the camp teaches is that kids and adults will make mistakes.

“It’s how we respond to this error that matters,” he said. “If we’re going to take somebody down, it’s going to affect the whole team. You have to work as one unit. You’re a team. You’re all going to fail as a team or thrive as a team. How it goes in life, you you will also do it in the world of work.”

“Everyone will make a mistake in the world of work,” he added. “Instead of ridiculing them for it, take it. What did we do wrong? How can we improve it? The same applies when someone wins. You did a great job. Now , what made it a great job? How can we apply that everywhere else?”

In turn, Arnott said that when you make mistakes, you have to forget what happened in the past. Today is a new day. Start on it.

“That’s the attitude we bring to the ‘Back to Roots’ youth programme,” he said. “It’s not about beating another team. It’s not about winning a championship. It’s about every child having the opportunity to do their best. Take this opportunity and pass it on. also to future generations. Sports and coaching numbers are increasing. We’re trying to rejuvenate that.”

VerBurg said one lesson children can learn from camp is hard work. The camp can also make football more popular for them.

“You have to apply hard work to every facet of your life,” he said. “I hope the children have learned that the harder they work, the better they will get. For us coaches, the more opportunities you have for children to have a football in their hands, the more it will pay off. popular youth football. . It was a great event. It was a good day.”

Arnott said this camp can prepare kids for more sports than football. It can also give future football coaches an opportunity to see top thumb talent.

“It prepares young people,” he said. “Not everyone wins a trophy. You have to work hard to get back up. Without a strong team, there is no team.”

According to Arnott, camp could also be an after-school getaway for kids.

“A child may have had a bad day at school and he will be able to hang out here,” he said. “They will be able to meet and play football with new people. It will impact the lives of everyone involved now and into the future. As long as we run this program, meet new people, build that connection, growing with each other and making friends, that’s what it’s all about.”

“With us as coaches running this program brings our communities together,” he added. “We’ve played in several different places in Upper Thumb. We also have sponsors who have come to us. It impacts our local economy, giving money and keeping it here, locally. It will grow our community.”

“I saw a lot of kids cheering each other on as they lashed out,” he said. “It was always great to watch. It’s one of the biggest lessons. It was a good day. It was a lot of fun. It was a great day for Bad Ax football. I look forward with looking forward to more opportunities like this.”

More information about the campsite

Arnott said he and the coaches want to give every Upper Thumb kid access to a sport.

“We went to triple overtime against the team that won the (youth league) championship last year,” he added. “The kids took a dim view of it. I told them not to see it that way. Look at what you’ve achieved. They faced a team of older kids. We hope (this camp helps build) a lifelong love of the game, and something that will pass on to generations to come.”

Last Saturday, April 23, the “Back to the Roots” youth football program held its first games of the season. The Franklin Inn team went 0-2 and the S&S team went 1-1 that day.