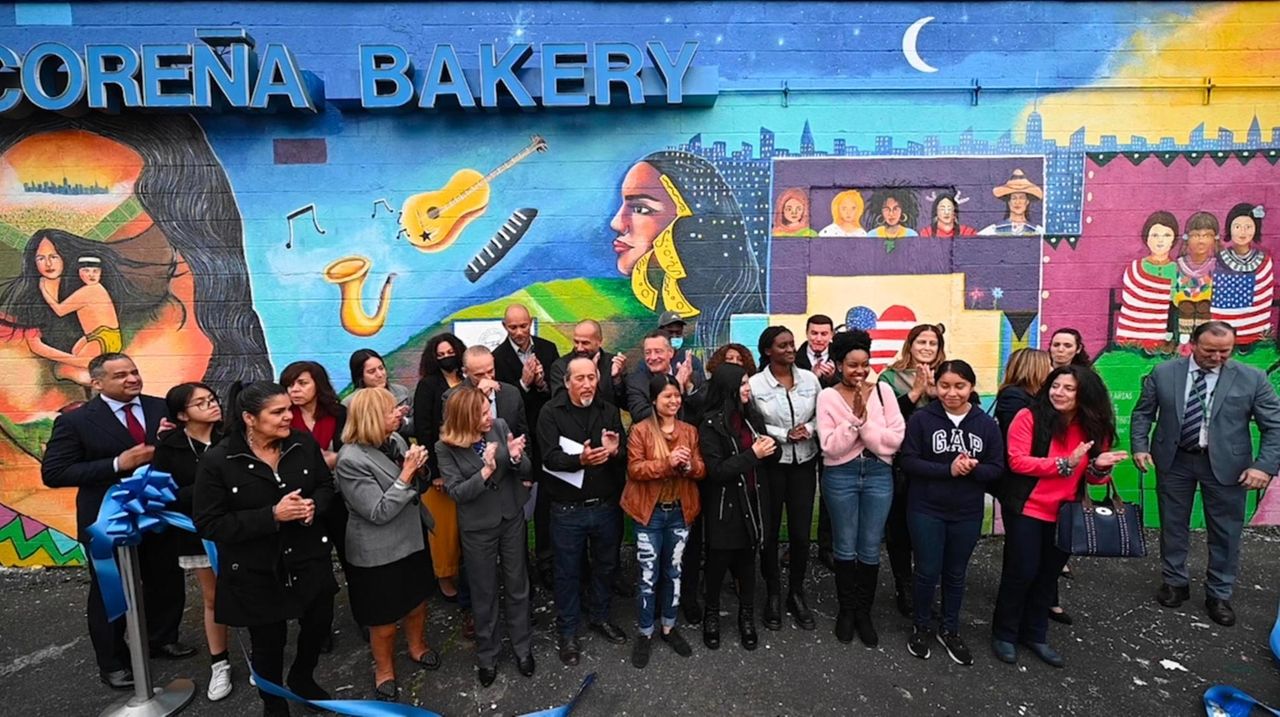 Brentwood mural an inspiring vision of an evolving Long Island

Whenever Marjelin Arias looks at the mural she helped design on the side of a Salvadoran bakery in Brentwood, she sees more than a colorful tale of immigrant history in America.

Through a brick wall outside the Jocorena Bakery on Wicks Road, the mural acts as a sort of immigration timeline: the often risky journey, a misunderstanding once that journey is over, and finally, a new one. life in a different country.

In the many colors of the mural, Arias, a high school student from Central Islip High School who arrived from El Salvador two years ago to find her mother, sees her story.

â€œWe all go through different walks and don’t know what to expect,â€ Arias, 18, said in Spanish outside the bakery on Thursday at an event celebrating the new mural, â€œCrossing Bordersâ€.

â€œThe strength is in ourselves because no matter what the walk,â€ she said, â€œthe journey is to find a way out to live this dreamâ€.

The mural repeats the wall of a Brentwood bakery that makes bread and other sweets familiar to locals with ties to El Salvador and other countries in Latin America or the Caribbean. According to the 2020 US Census, Brentwood’s population is 75.5% Latino, or 47,072, most of the seven hamlets and villages of the predominantly Latin American Long Island.

The biggest news, politics and crime stories in Suffolk County, delivered to your inbox every Friday at noon.

Segundo Orellana, a muralist for 30 years, has supervised the students who have done the mural, among five projects in Islip Town since May, which he has done on his own or with help.

Orellana’s murals feature flags from Caribbean or Latin American countries, a reflection of the growing number of people from both regions coming to live on Long Island.

â€œIt is important for me that children and adults identify with their culture through art,â€ said Orellana, from Ecuador, in Spanish.

“I believe [the mural] brings social engagement and empowers the community because along with beautification it also brings economic development, â€said Espada, originally from Puerto Rico.

Seen from left to right, the fresco begins with a mother holding her young daughter, their facial expressions reluctant or uncertain. Behind them is farmland. In front of them, the skyline of Manhattan loomed in the distance. Musical instruments – a saxophone, an acoustic guitar, a keyboard – float against a powder blue sky.

The profile of a woman of color looks from the horizon towards mother and child. At the end of the mural, three children of different ethnicities are standing, wrapped in an American flag near a version of the stars and stripes in the shape of a heart.

â€œA big part of who we are is our music, our traditions, our language and that’s what you see,â€ said Dafny Irizarry, president of the Long Island Latino Teachers Association, which has helped students develop and to refine the interlocking themes of the fresco.

Irizarry, from Puerto Rico, said the students “shared that sometimes some might want to paint a picture of us, our youth and our community that is sometimes inaccurate or sometimes incomplete. This mural shows our history.”

Julio Paulino owns La Placita Deli, next to the bakery, and the entire building. Paulino initially said he was concerned the mural project might mean graffiti.

Then Paulino heard that it was a project involving high school students painting on something he was familiar with. He then changed his mind.

â€œIt’s an immigrant neighborhood and I think the painting shows everything about immigrants, the American dream,â€ said the resident of Brentwood, from the Dominican Republic.

Arias and the other five students, all of color living in Brentwood or Central Islip, spent three weeks after school and weekends working on the mural.

Wuraola Balogun was among them. Also an elder from Central Islip, Balogun said she wanted people to look at the mural and see the community, the unity and the “struggles of how people come to this country and make a living.”

â€œI still have the story of coming to this country,â€ said Balogun, 17, born in Nigeria.

Legis. Samuel Gonzalez (D-Brentwood) sponsored the project through a Suffolk County Omnibus Grant, which comes from the hotel and motel tax and is used for cultural and historical purposes.

For Arias, the mural project and its ambitious themes make her reflect on her own future.

â€œMy dream is to go to college to study art,â€ she said. “After I finish my studies, I want to become an art teacher and teach anyone who wants to learn more about art.”

Domestic violence survivor shares her journey from abuse to freedom