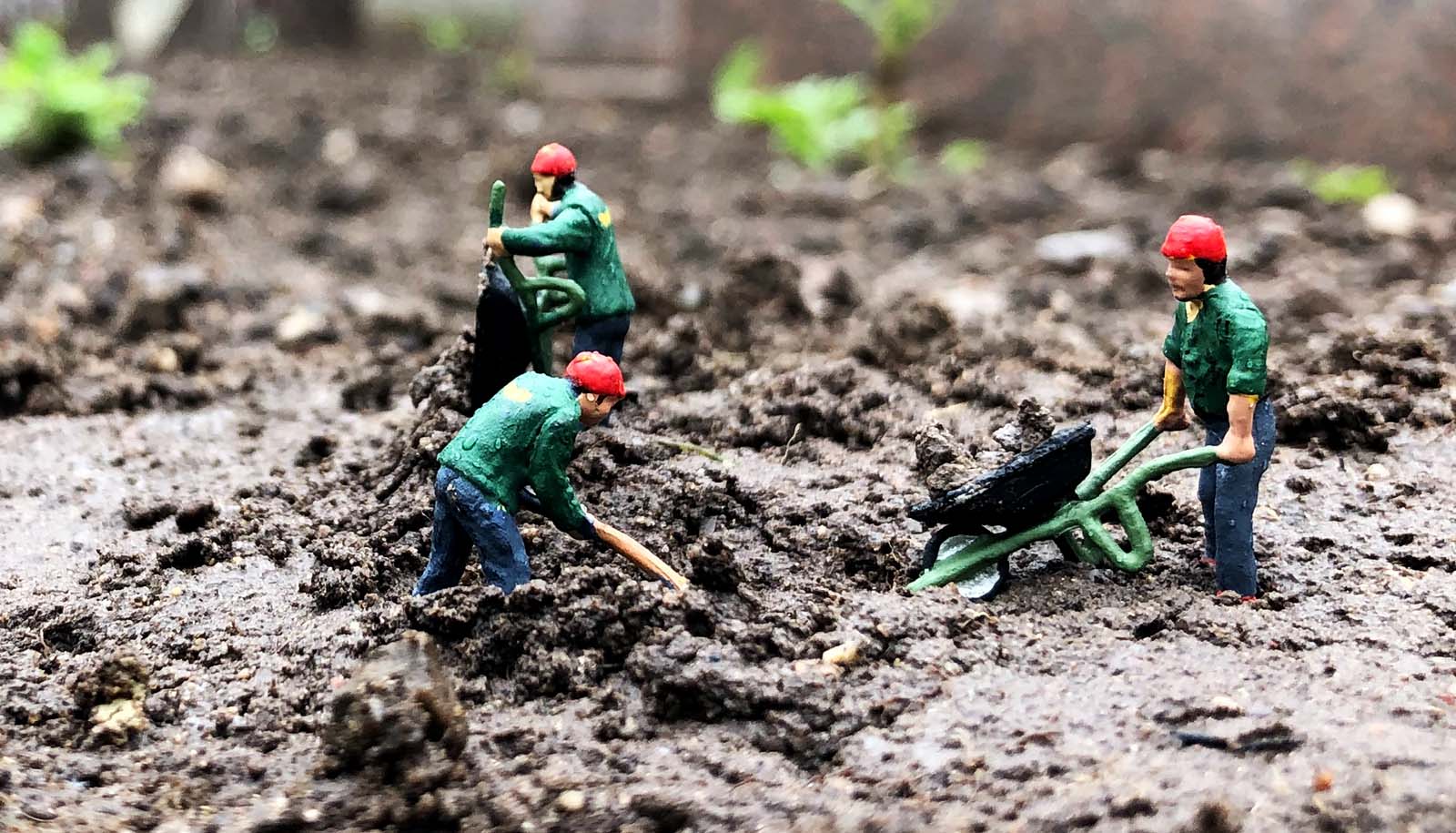 You are free to share this article under the Attribution 4.0 International License.

A spot of molecular glue and a timely twist helps a bacterial enzyme convert carbon dioxide into carbonaceous compounds 20 times faster than plant enzymes during photosynthesis, according to research.

The results should accelerate progress toward converting carbon dioxide into a variety of products.

Plants depend on a process called carbon fixation — turning carbon dioxide from the air into carbon-rich biomolecules — for their very existence. That’s what photosynthesis is all about and the cornerstone of the vast, interlocking system that moves carbon through plants, animals, microbes, and the atmosphere to sustain life on Earth.

But the champions of carbon fixation are not plants, but soil bacteria. Some bacterial enzymes perform a key step in carbon fixation 20 times faster than plant enzymes. Understanding how they do this could help scientists develop forms of artificial photosynthesis to convert greenhouse gases into fuels, fertilizers, antibiotics and other products.

Now a team of researchers has discovered how a bacterial enzyme, a molecular machine that facilitates chemical reactions, activates to accomplish this feat.

Rather than grabbing carbon dioxide molecules and attaching them to biomolecules one at a time, they discovered that this enzyme is made up of pairs of molecules that work in sync, like the hands of a juggler throwing and catching. bales simultaneously, to get the job done faster. . One member of each enzyme pair opens wide to catch a set of reaction ingredients while the other closes in on its captured ingredients and performs the carbon fixation reaction; then they switch roles in a continuous cycle.

A single point of molecular ‘glue’ holds each pair of enzymatic hands together so they can alternate opening and closing in a coordinated fashion, the team found, while a twisting motion helps push in and out the ingredients and finished products of the pockets where the reactions take place. When glue and twist are present, the carbon fixation reaction is 100 times faster than without them.

“This bacterial enzyme is the most efficient carbon fixer we know of, and we’ve found a clear explanation of what it can do,” says Soichi Wakatsuki, a professor at the Department of Energy and Energy’s SLAC National Accelerator Laboratory. at Stanford University and a senior leader of the study, which appears in the journal AEC Core Sciences.

“Some of the enzymes in this family act slowly but very specifically to produce a single product,” he says. “Others are much faster and can make chemical building blocks for all sorts of products. Now that we know the mechanism, we can design enzymes that combine the best features of both approaches and do very fast work with all kinds of raw materials.

The study enzyme is part of a family called enoyl-CoA carboxylases/reductases, or ECRs. It comes from soil bacteria called Kitasatospora bristleswhich in addition to their carbon-binding abilities can also produce antibiotics.

Wakatsuki learned about this family of enzymes half a dozen years ago from Tobias Erb of the Max Planck Institute for Terrestrial Microbiology in Germany and Yasuo Yoshikuni of the DOE’s Joint Genome Institute (JGI). Erb’s research team was working on the development of bioreactors for artificial photosynthesis to convert carbon dioxide (CO2) of the atmosphere in all kinds of products.

As important as photosynthesis is to life on Earth, Erb says, it’s not very efficient. Like all things shaped by evolution over eons, it’s as good as it gets, the result of slowly building on previous developments but never inventing something entirely new from scratch.

Additionally, he says, the step of natural photosynthesis that fixes CO2 air, which relies on an enzyme called Rubisco, is a bottleneck that bogs down the entire chain of photosynthetic reactions. So using fast ECR enzymes to perform this step, and designing them to go even faster, could bring a big improvement in efficiency.

“We’re not trying to make an exact copy of photosynthesis,” Erb explains. “We want to design a much more efficient process by using our understanding of engineering to reconstruct concepts from nature. This “photosynthesis 2.0” could take place in living or synthetic systems such as artificial chloroplasts, water droplets suspended in oil. »

All about the enzyme

Wakatsuki and his group had been investigating a related system, nitrogen fixation, which converts nitrogen gas from the atmosphere into compounds that living things need. Intrigued by the question of why ECR enzymes were so fast, he began collaborating with Erb’s group to find answers.

The SLAC team took samples of the ECR enzyme and crystallized them for X-ray examination at the DOE’s Argonne National Laboratory Advanced Photon Source. The X-rays revealed the molecular structure of the enzyme – the arrangement of its atomic scaffolding – both on its own and when attached to a small helper molecule that helps its work.

Further X-ray studies at SLAC’s Stanford Synchrotron Radiation Lightsource (SSRL) showed how the enzyme’s structure shifted when attached to a substrate, a kind of molecular workbench that assembles the ingredients for the reaction. carbon fixation and stimulates the reaction.

Finally, a team of researchers from SLAC’s Linac Coherent Light Source (LCLS) conducted more detailed studies of the enzyme and its substrate at the SACLA free-electron X-ray laser from Japan. The choice of an X-ray laser was important because it allowed them to study the behavior of the enzyme at room temperature, closer to its natural environment, with almost no radiation damage.

Meanwhile, Erb’s group in Germany and Associate Professor Esteban Vöhringer-Martinez’s group at the University of Concepción in Chile conducted detailed biochemical studies and extensive dynamic simulations to make sense of the structural data collected by Wakatsuki. and his team.

The simulations revealed that the opening and closing of the two parts of the enzyme not only involve molecular glue, but also twisting movements around the central axis of each pair of enzymes, Wakatsuki explains.

“This twist is almost like a ratchet that can push a finished product or pull a new set of ingredients into the pocket where the reaction is taking place,” he says. Together, the twisting and synchronizing pairs of enzymes allow them to fix carbon 100 times per second.

The ECR enzyme family also includes a more versatile branch that can interact with many types of biomolecules to produce a variety of products. But since they aren’t held together by molecular glue, they can’t coordinate their movements and therefore operate much more slowly.

“If we can increase the rate of these sophisticated reactions to create new biomolecules,” says Wakatsuki, “that would be a significant leap in the field.”

Experiments so far have produced static snapshots of the enzyme, reaction ingredients, and end products in various configurations.

“Our dream experiment,” says Wakatsuki, “would be to combine all the ingredients as they flow through the path of the X-ray laser beam so that we can watch the reaction unfold in real time.”

The team actually tried that at SACLA, he says, but it didn’t work. “The CO2 the molecules are really small and they move so fast that it’s hard to catch when they attach to the substrate,” he says. “Additionally, the X-ray laser beam is so powerful that we couldn’t keep the ingredients long enough for the reaction to take place. When we pressed hard to do so, we managed to crack the crystals.

An upcoming high-energy upgrade to the LCLS will likely solve that problem, he adds, with pulses that arrive much more frequently, a million times per second, and can be individually adjusted to the ideal strength for each sample.

Wakatsuki says his team continues to collaborate with Erb’s group, and is working with the LCLS sample distribution group and with researchers at the SLAC-Stanford cryogenic electron microscopy (cryo-EM) facilities to find a way to make this approach work.

Researchers from the RIKEN Spring-8 Center and the Japan Synchrotron Radiation Research Institute also contributed to this work, which received major funding from the DOE Office of Science. DOE’s Joint Genome Institute provided the DNA used to produce the RCT samples.