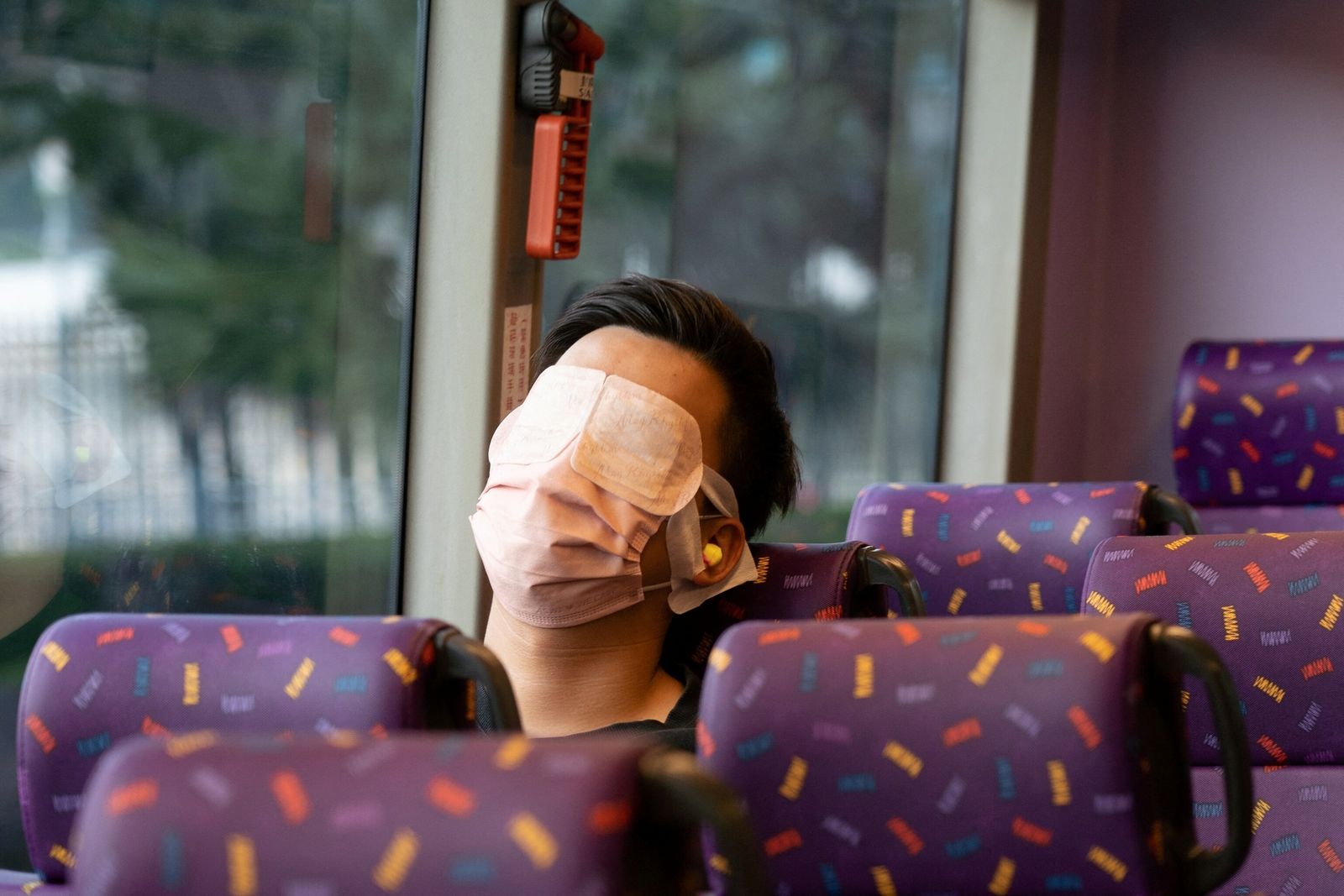 Six weeks after a mild case of COVID-19 at the start of the pandemic, Erika Thornes started waking up every night between 2 and 3 a.m. Unable to get back to sleep, she listened to podcasts, read and scrolled through Twitter before finally dozing off. 4 or 5 a.m. That was over two years ago and Thornes, a mother of three teenagers in San Diego, USA, still struggles to sleep through the night from time to time.

A similar thing happened to her husband during a recent COVID infection. He suddenly woke up at 3 a.m. every night. His sleep improved when he stopped testing positive, but the symptom was extreme while it lasted. “He was pretty shocked,” she said. “He knew I was waking up, but I don’t think he quite understood the seriousness of ‘awake’.”

Nightmares. Days without sleep. Waking up in panic in the middle of the night. Sleep 18 hours a day. As COVID-19 has swept across the world’s population, so have reports of sleep disruptions both during an infection and in the weeks and months following.

The links between COVID and sleep are still being explored, but studies show that bacterial and viral infections, in general, interfere with sleep through physical and psychological mechanisms. Recognizing the potential of the virus to disrupt sleep, experts say, can help people get the care they need.

How sleep and the immune system influence each other

Sleep is intimately linked to the immune system, a link that is both well known and still mysterious. Getting enough rest can help prevent infections, according to evidence and observations dating back thousands of years. But infections can also disrupt sleep in complicated ways.

Animal studies show that viruses and bacteria alter both the time spent sleeping and the type of sleep, says John Axelsson, director of the sleep laboratory at the University of Stockholm in Sweden. When researchers inject rabbits or rodents with moderate doses of bacteria or viruses, the animals sleep more. They get more non-rapid eye movement sleep, a deep resting state thought to be important for recovery; and they spend less time in dream-filled REM sleep.

Cytokines, a class of molecules that can boost or slow inflammation, appear to play a major role in these patterns, Axelsson says. When healthy animals are sleep deprived, levels of certain pro-inflammatory cytokines in the brain increase, causing animals to sleep more than usual. When scientists block these cytokines, animals no longer sleep, even when they are sleep deprived.

It’s harder to do the same kind of research in humans, and the results are mixed on how sleep changes during illnesses. But studies suggest that, at least to some extent, inflammatory molecules affect sleep in ways comparable to other animals. In studies from the 1990s and early 2000s, researcher Thomas Pollmächer and his colleagues injected people with fragments of bacterial cell walls, called endotoxins, and found that mild activation of the immune system increased the willingness to sleep and improved non-REM sleep.

But once the immune system kicked in with increased levels of cytokines and symptoms of illness, people experienced more disrupted sleep, something not typically seen in animals. “The inflammatory system increases the desire to sleep,” says Axelsson. “But at the same time, it then disturbs your sleep if you have a fever.”

To see how respiratory infections affect human sleep, Axelsson and colleagues recruited 100 healthy adults to keep a detailed sleep diary after experiencing early symptoms of a respiratory infection while wearing a sleep-tracking device. wrist sleep. Of the 100 volunteers, 28 people fell ill. Overall, these people spent more time in bed and slept more after their symptoms began, researchers reported in 2019.

But it wasn’t restorative sleep. Those infected had difficulty falling asleep, waking up more and having more restless sleep, especially when they were most symptomatic. As the symptoms subsided, sleep improved. Anecdotally, it’s the same pattern reported by many people with COVID — lots of sleep initially followed by insomnia or other disturbances while they’re sickest. The physiological drive to sleep more while getting sick could be adaptive, helping the body fight off the invader, Axelsson says.

For many people, sleep disturbances don’t stop at day 10 or when someone tests negative. To assess how often sleep disturbances persist, researchers surveyed more than 650 long-term COVID patients who visited Cleveland Clinic’s reCOVer Clinic between February 2021 and April 2022. Up to six months after infection, 41% reported sleep disturbances; Another 7% reported serious disruptions. Black patients, 12% of study participants, were three times more likely to report sleep problems than other groups — echoing disparities seen throughout the pandemic, says Cinthia Peña Orbea, sleep specialist and lead author of the study, which was published in June. .

Elsewhere, there have been reports of post-COVID narcolepsy, excessive sleep and physical dreaming with movements like kicking and talking instead of standing still with typical sleep-induced paralysis, says Monika Haack, psychoneuroimmunologist at Harvard Medical School in Boston, USA, co-author of a 2019 review on links between sleep and disease.

Peña Orbea’s study suggests that the long COVID matches other chronic illnesses for causing sleep problems. About 60% of people living with HIV and more than 50% of people with hepatitis C suffer from sleep disturbances, as do people with ME/CFS, also known as chronic fatigue syndrome. People with inflammatory bowel disease, rheumatoid arthritis, and other inflammation-related diseases — all immune disorders — often suffer from lack of sleep.

Haack studies the details of how sleep disruption interacts with the immune system. In a soon-to-be-published study, she and her colleagues found that sleep disturbances in 24 healthy people led to the production of more molecules that prolong inflammation and, in particular, a suppression of molecules that normally stop that inflammation. . Even after three full nights of recovery sleep, the inflammation persists, underscoring the need to preserve good sleep in the first place.

Taken together, the evidence illustrates that insomnia can cause or exacerbate many symptoms associated with both acute COVID and long COVID, including depression, fatigue, and brain fog. These symptoms can in turn make it difficult to sleep. “It’s always two-way,” says Haack. Insomnia, sleep apnea and other disturbances, she says, “all can reduce the quality, depth, continuity or regularity of sleep and weaken the immune support functions that accompany normal sleep.”

Ultimately, scientists might be able to develop drugs that affect cytokine levels to improve sleep, says James Krueger, an expert in sleep biochemistry at Washington State University in Spokane. But it’s a difficult task because the relationships between cytokines and sleep are extraordinarily complex. Some pro-inflammatory cytokines improve sleep at low concentrations, but at higher concentrations they cause wakefulness and fragmented sleep. There are also anti-inflammatory cytokines that primarily inhibit sleep at low concentrations.

Hundreds of proteins interact to regulate the immune system and other processes, Krueger says. COVID and other infections are changing these interactions. Targeting these molecules remains a work in progress. “For complex behaviors and brain processes such as sleep, new drugs have been developed in recent years,” he says. “Time will tell if they are better than previous drugs.”

How to improve sleep after COVID

Helping people get better rest during and after COVID infections starts with recognizing the importance of sleep, Haack says. This may include avoiding medications that disrupt sleep, such as opioids, and reducing light, noise, and repeated wakings for people in hospital.

Establishing regular sleep routines with consistent bedtimes and wake times is often part of insomnia care, Axelsson says. It can also help people limit the time spent in bed to increase sleep efficiency and avoid spending too much time awake.

Haack recommends mindfulness apps to reduce stress and anxiety. For his long COVID patients, Peña Orbea has seen cognitive behavioral therapy lead to improvements. “With insomnia, the brain is in a state of hyper-arousal,” she says. “We’re trying to reset that excitement mindset.”

Physical activity and fresh air can help a subset of people who may have stopped going outside due to their illness, Axelsson says. But for many people with long-term COVID, exercise can lead to serious setbacks, underscoring the need for individualized medical care if sleep issues persist post-COVID.

“Sleep disturbances can be quite normal during acute COVID infection, due to sleep-disrupting symptoms such as pain, cough, stuffy nose,” says Haack. “If sleep disturbance persists beyond the acute symptomatic phase or begins to develop as a new symptom, now is the time to seek help.”