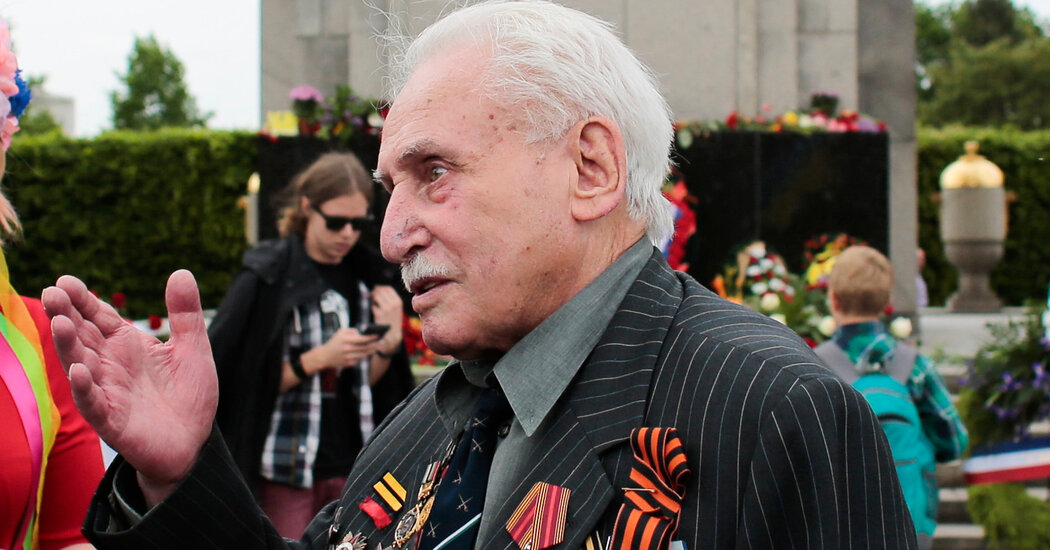 BERLIN – David Dushman, who, as a soldier of the Soviet Union, drove his tank through the electric fence surrounding the Nazi death camp Auschwitz on January 27, 1945 and was said to have been the camp’s last surviving liberator, died in Munich on Saturday. He was 98 years old.

Mr Dushman’s death was confirmed in a statement from the Munich Jewish Community Organization on Sunday. No cause of death was given.

“Every witness to history that leaves us is a loss, but parting with David Dushman is particularly painful,” Charlotte Knobloch, president of the organization, said in the statement.

Mr Dushman was a 21-year-old Red Army soldier when he drove his T-34 through the high barbed wire fence surrounding the Auschwitz death camp in Nazi-occupied Poland.

Approaching the camp, he remembers looking through the viewing slit of his tank and, even after years of bloody fighting, being shocked at what he had witnessed.

“Everywhere there were skeletons. They stumbled out of the barracks, sat down and lay among the dead, ”he told German newspaper Süddeutsche Zeitung in 2015.“ It was horrible. We threw all of our cans at them and continued to drive fast, to keep chasing the fascists. “

By the time Mr. Dushman reached Auschwitz, he had already survived two of the war’s bloodiest battles on the Eastern Front, at Stalingrad and Kursk. By the end of the war he had been wounded three times. He said he was one of 69 out of 12,000 in his division to survive.

It wasn’t until after the war, however, that he began to understand what he had witnessed at the death camp.

“To be honest, we knew next to nothing about Auschwitz,” he recalls.

More than 1.1 million men, women and children were murdered in the camp, installed in 1940 on the outskirts of Oswiecim, a Polish city annexed by the Nazis. Over 6 million Jews were murdered during the Holocaust.

A Russian Jew, Mr. Dushman and his family were familiar with anti-Semitism and state-sanctioned discrimination against Jews in the Soviet Union.

Mr Dushman’s birth certificate stated that he was born in Minsk on April 1, 1923, but he maintained that his true birthplace was the port city of Danzig, now Gdansk in Poland. He said his mother, Bonislava, had changed location for political reasons.

His father, Alexander, Soviet military doctor and hero of the Revolution, fell out of favor with Joseph Stalin, the Soviet leader, and was banished in 1938 to a gulag in Siberia. He died there in 1949.

After the war, Mr. Dushman studied medicine in Moscow out of love for his mother, a pediatrician who wanted her son to carry on the family tradition of medicine.

But his passion was fencing, and after his studies Mr. Dushman devoted himself to the sport.

He became the highest ranked fencer in the Soviet Union in 1951 and was a coach at the elite sports club of Spartak Moscow from 1952 to 1988. He also coached the Soviet Union women’s national team in fencing . Well into his 90s, Mr. Dushman took the metro to a Munich sports club three times a week to do fencing.

He was married to his wife Zoja for 60 years and, as the couple never had children, he said he came to regard the young people he trained as family.

Zoja died in 2011 at their home in Munich, where they had emigrated in 1996. No information on the survivors was immediately available.

At the 1972 Munich Olympics, his team won two gold, two silver and three bronze. But the victories were overshadowed by the attack on the Israeli team, which was hosted across from the Soviets in the Olympic Village.

“We heard gunshots and the hum of helicopters above us,” he later recalls. “We and all the other athletes were outraged. “

A decade later, during the world fencing championship, the foil of a German fencer broke, fatally stabbing his Soviet opponent in the eye. When German athlete Matthias Behr burst into tears of horror, it was Mr. Dushman who rushed to his side with words of comfort.

“It’s not your fault,” he told Mr. Behr. “An accident like this was planned by God. “

When Thomas Bach, now president of the International Olympic Committee, was himself a junior fencer for West Germany in the 1970s, he recalled that Mr. Dushman befriended him and him. had offered advice, which he recalled in a statement as “a deep human gesture that I will never forget.

In 2015, Mr. Bach invited the former coach to the IOC headquarters in Lausanne, Switzerland, where Mr. Dushman appealed to the committee to promote sport as a path to peace.

“My biggest dream and hope for future generations is to live in a world where there is no war,” Dushman said during his visit. “I urge Thomas Bach and the IOC to do everything possible to use sport as a means to spread peace and reconciliation around the world. War is something that should never happen again.