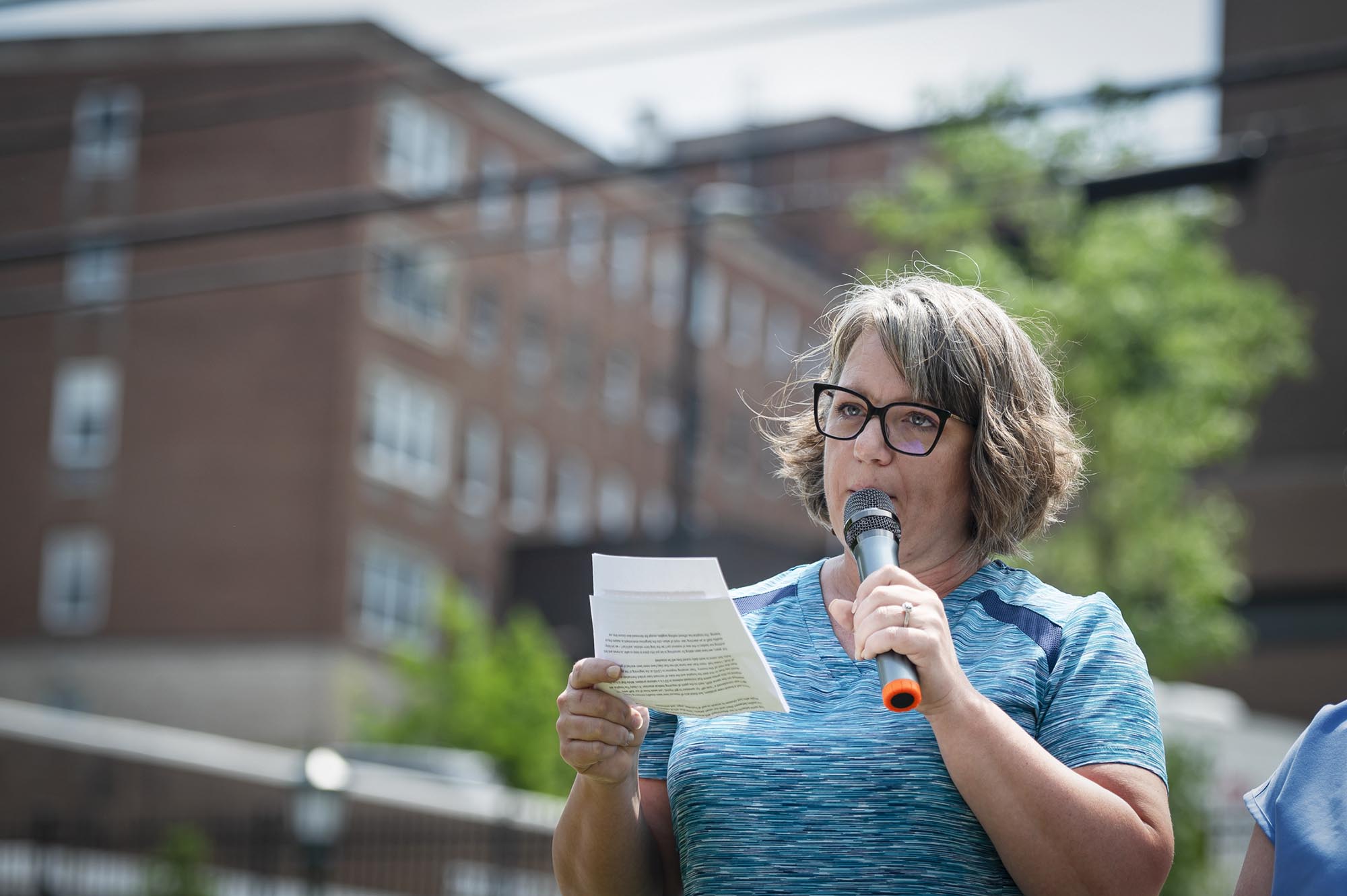 BURLINGTON — Megan Martin said she felt safer deployed to Afghanistan than when she worked in the emergency department at the University of Vermont Medical Center.

“There are days when I go to work and I feel more in danger for my own body than when I was deployed in the Middle East as an air nurse,” she said during of a press conference held Thursday by nurses in front of the hospital where they work. .

Martin and two other nurses said the violence was escalating in the emergency department and denounced what they said was a lack of action by hospital administrators, the county state attorney of Chittenden, Sarah George, of the police and the state.

“We are here today because we used our voices and our bodies to fight for a safer department for you and for us, and we don’t seem to be heard by the administrator,” said Amanda Young, 45. , an emergency. duty nurse for 13 years. “We hope now that the community will hear our pleas and know that we are working hard to protect you, but we are tired and need you to join our voices now.”

The hospital administration recognizes that this is a problem. “You know, they are right. This is totally unacceptable,” hospital spokeswoman Annie Mackin said in an interview Thursday.

George said she spoke with the nurses for an hour after hearing her name was mentioned at the press conference.

“I was shocked and really, really worried about what I was hearing,” she said. “I can only speak to my office and what I have told them is that if we receive any specific cases involving staff slapping the body, strangling staff, beating staff, headbutting, we will take these cases seriously. And if they’re told we’re not, they have to call me and ask me directly,” she said.

The UVM Health Network responded with a press release shortly after, acknowledging the “acute impacts” of a troubling national trend and calling for community action to address rising levels of violence reported by healthcare workers. .

Meanwhile, the emergency department is bleeding staff, literally and figuratively, nurses said. Due to the escalation of violence, some of their colleagues quit or give up their full-time nursing positions.

Martin, a forensic nurse who worked at the University of Vermont Medical Center for four years and in emergency medicine for 14, is one of them. There were rules, responsibility and support in the military, she said, but as an ER nurse, “I often feel alone.”

Martin gave her notice and plans to work as a school nurse instead, she said.

A few months ago, registered nurse Eisha Lichtenstein, 31, said she saw a staff member ‘get her body slammed at race speed by a man more than twice her size’ while she was protecting a small child.

Lichtenstein said she understands nursing is a difficult profession, but “I didn’t expect this level of violence, nor do I feel ready to protect myself the day it heads into my life. direction”.

Despite repeatedly raising the issues with the administration, the nurses said they felt nothing had been done to make their workplace safer. They called for increased security, including the use of a now unused metal detector, the presence of more than two security guards and an armed officer 24/7, a procedure of removal and storage of weapons and better exterior lighting.

“It is unacceptable, unconscionable for our administration to learn of the countless injuries, to hear our pleas and not to do everything in their power to protect us,” said Lichtenstein, who was transferred to the emergency room after being been hospitalized over a year ago. .

Mackin said there were two security guards in the emergency department during the day and three at night. Campus-wide, the hospital is looking to hire eight more to reach the 36 it considers fully staffed.

She said several security jobs had already been posted and the hospital had been trying to find a qualified metal detector operator for some time, but was told there was a year-long wait. Given the staffing challenges, “we’re doing what we can in the realities we face, but it’s really difficult right now,” she said.

Mackin said the medical center’s president and chief operating officer, Dr. Stephen Leffler, is “extremely concerned about this. He loses sleep. She added: “We are taking action and doing what we can.”

George said she instructs her team of 14 lawyers to alert her to cases involving healthcare workers so she can personally handle them. She also said she had shared her contact details with the nurses so they could contact her directly. George said she did it after a nurse told her she had been involved in such a case that was going nowhere.

“I just didn’t realize how bad and dangerous it was for them there,” she said. “My mother, brother and sister-in-law are all nurses at Dartmouth Hitchcock. I am very attached to this profession. I care deeply about this job and want to make sure that an already incredibly difficult job isn’t made harder because of the way I do things.

Deb Snell, a critical care nurse and vice-president of the nurses’ union, said safety requirements are now part of collective bargaining. “It’s horrible that we have to negotiate to keep people safe,” she said after the press conference. “We see this everywhere, but emergency is unfortunately at the forefront of workplace violence.”

The Vermont Hospital and Health Systems Association said it hears many of these complaints, and the organization works with hospital leaders, community service providers, state officials and law enforcement. the order to solve the problem.

“Our goal is to ensure that our communities receive the care they need in a safe environment. Unfortunately, we are experiencing an increasing number of incidents of workplace violence in our hospitals,” Jocelyn Bolduc, executive assistant to the association’s president and CEO, said in a statement. “This is happening in hospitals, large and small, across the country and it is totally unacceptable.”

Touro University celebrates the launch of its graduate division