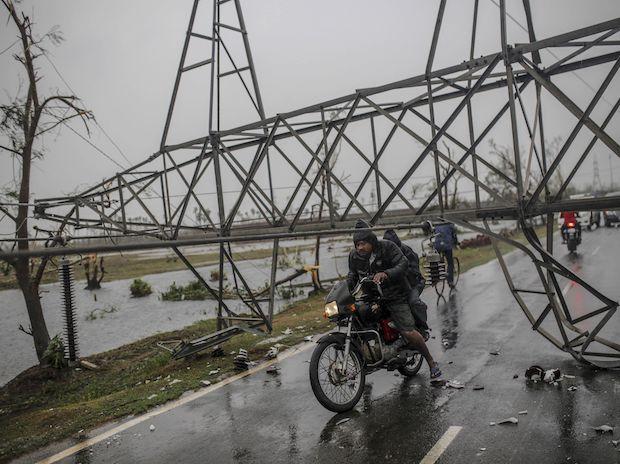 An increase in extreme weather events such as floods, droughts and cyclones threatens to worsen debt worth more than Rs.619 trillion ($ 84 billion) at India’s largest financial institutions.

That’s according to leading nonprofit environmental disclosure platform CDP. The State Bank of India, the country’s largest lender, HDFC Bank, IndusInd Bank Ltd. and Axis Bank Ltd. are among the institutions that reported climate risks to CDP in 2020, she said in her annual report released on Wednesday.

Banks have reported exposure to environmentally sensitive companies including cement, coal, petroleum and power. They also listed the effects of cyclones and floods on loan repayments in agriculture and related sectors. Lenders accounted for 87% of the total risk, valued at around $ 97 billion, at 67 large Indian companies that responded to the CDP.

“The climate is the biggest risk for businesses in the long run. Financial institutions are starting to understand this, ”said Damandeep Singh, director of New Delhi-based CDP India. “As investors seek to fund companies based on environmental, social and governance disclosures, we have seen many other companies reporting climate change risk. “

The potential damage to agriculture echoes concerns expressed by India’s central bank about the impact of climate change on agriculture, a sector that employs more than half of its citizens. At the same time, the world’s third-largest emitter of greenhouse gases is relying on coal to help its post-Covid recovery. The dirtiest fossil fuel could remain its dominant energy source for decades to come.

The CDP, which collected the data on behalf of 515 investors with $ 106 trillion in assets, said it received responses from 220 large and small Indian companies.

The State Bank of India, which is facing concerns from shareholders and investors over its proposal to help finance the controversial Carmichael coal mine in northern Australia, has put its total climate risk at 3.83 trillion of rupees. The bank said it could “indirectly face reputational risks if it were involved in lending to environmentally sensitive projects that could meet significant public opposition.” SBI did not respond to a request for comment.

The second highest risk was reported by HDFC Bank, which estimated it had Rs 1.79 trillion in assets at risk, a 24% increase from 2019. It said its calculations held into account the indemnities it should pay to employees in the event of a flood. and its exposure to agriculture, cement, coal, petroleum and electricity.

India was second in the Asia-Pacific region and sixth globally in the CDP’s ranking of countries whose companies have committed to science-based net zero carbon emissions targets, according to the report. More than 50 Indian companies have said they are preparing for future policy and regulatory changes by making a voluntary commitment to reduce their carbon footprint.

Increased investor pressure and stricter disclosure standards are forcing Indian companies to address climate concerns, according to the CDP report. Almost all companies reported board-level oversight of climate-related issues, while 84% said climate-related risks and opportunities caused them to change their plans for products and services.

Business Standard has always strived to provide up-to-date information and commentary on developments that matter to you and have broader political and economic implications for the country and the world. Your encouragement and constant feedback on how to improve our offering has only strengthened our resolve and commitment to these ideals. Even in these difficult times resulting from Covid-19, we remain committed to keeping you informed and updated with credible news, authoritative views and cutting edge commentary on relevant current issues.
However, we have a demand.

As we fight the economic impact of the pandemic, we need your support even more so that we can continue to provide you with more quality content. Our subscription model has received an encouraging response from many of you who have subscribed to our online content. More subscriptions to our online content can only help us achieve the goals of providing you with even better and more relevant content. We believe in free, fair and credible journalism. Your support through more subscriptions can help us practice the journalism to which we are committed.