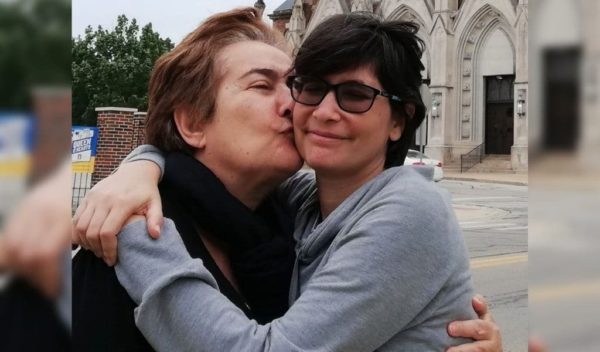 Harassed, prevented from leaving the country, distressed, the relatives of political prisoners face a silent and harsh reality.

HAVANA TIMES – The day political prisoner Ana Margarita Vijil saw her mother after 80 days of imprisonment in the police compound known as “New Chipote” prison, she wanted to be strong. Yet her mother, Maria Josefina Gurdian, noticed that Ana Margarita was pale, very thin, and suffered from a stomach infection. For her part, Ana Margarita’s biggest concern was the health of her mother, who has been on cancer treatment since 2019.

Despite all the difficulties she experiences in prison, Ana Margarita did not want to distress her mother. “Instead of telling me about herself, she asked me questions about myself,” says Maria Josefina, affectionately known as Pinita. “I have had chemotherapy twice. I lost my hair and now it has grown back. I am healing, but the cancer is hard; it’s a traitor and you’re never sure. Plus, he can get stronger during these times of tension and pain caused by the unfair detention of Ana Margarita and Tamara. [Tamara Davila, her granddaughter, is also a political prisoner].

Cristian Tinoco, daughter of political prisoner Victor Hugo Tinoco, also fights against cancer. She is currently in the hospital and her illness is her father’s greatest concern. To these cases is added the situation of the political prisoner Max Jerez. His mother died of pleural effusion and pneumonia on September 17, but Max, her son, was not allowed to say goodbye to him.

The cruel, degrading and inhuman treatment suffered by political prisoners under the regime of Daniel Ortega and Rosario Murillo are shared by their families. Vilma Nuñez, president of Cenidh, says families are also “practically victimized” because in some cases they are not even allowed to visit a loved one on their deathbed. In other cases, relatives suffering from serious illnesses are mistreated in various state institutions.

The victimization of relatives of political prisoners represents “an extremely serious situation”, advises Nuñez. She cites the principles of criminal justice, which state that “the punishment must not extend beyond the individual of the detainee”. If someone is convicted of a crime, “this anguish, this desperation, should not be passed onto their families; they have the right to see them regularly and, in the event of death, the detainee must be able to attend the funeral.

“It is really painful, really dramatic to see the permanent pilgrimages of these families, to climb this hill to approach the” New Chipote “prison in the hope of finding a policeman who will offer a different answer than the one we have. orders them to give… The most that they have succeeded is: “We will ask” or “These are orders from above.” Where above? This response – “These are orders from above” – tells the world that the orders for all imprisonment and all rights violations come directly from El Carmen [the presidential residence]. “Nuñez is watching.

Restrictions on emigration as collective punishment

On September 2, Pinita Gurdian was on a bus to Costa Rica, to undergo specialized examinations that could rule out the presence of cancer cells in her body. However, at the Peñas Blancas border post, Nicaraguan authorities confiscated her passport and essentially forced her to return to Managua. Since then, he has been asked several times to retrieve his document. No one has been able to explain why she is being prevented from leaving the country.

“I was arrested at Peñas Blancas, and I could not continue my trip because they took my passport. This passport has not been returned. It is a totally arbitrary action. Why are they detaining me? I was traveling for my health. Why are they going to hold me back, if I’m a free person? I have the right to leave, I have the right to move around freely, ”complains Pinita. She tries to be strong, because “this situation is interfering with the process of my cancer battle. I know keeping calm is the best gift I can give them [Ana Margarita and Tamara]. “

Forbidden to travel abroad for her specialist exams, “the only thing I did was see my gynecologist oncologist here. But that won’t help find out if I have cancer cells in my body, ”comments Pinita. She is very afraid that the disease will continue to develop in her body.

Lesther Aleman Navarrete, father of political prisoner Lesther Aleman Alfaro, has encountered an equally arbitrary travel restriction. He flew to Nicaragua from the United States, to investigate his son’s situation and to support his wife in Nicaragua. Inexplicably, an “order from above” prevented him from entering his own country.

Alemán said Confidential that when he got off the plane for the first time, he noticed the presence of two policemen and two Nicaraguan army officials. He didn’t react, but continued down the hallway at the airport. He presented his negative COVID test and immigration papers, then went to the counter to have his passport stamped. At that time, he realized that the four officials were behind him. Another policeman approached him, as well as an employee of the Nicaraguan Migration and Foreign Affairs Office, who asked for his passport.

After examining his passport, they asked him to remove his mask to take his picture. They took him to a separate room where a police officer asked him, “Did you know that you are not allowed to enter the country? Lesther Sr. asked why, since he is Nicaraguan and entered with a national passport. The official replied, “There is an order from above which you cannot enter. “

The isolation regime imposed on political prisoners does not allow their relatives to communicate or inform them of family situations. This was the case with political prisoner Miguel Mora, whose relatives could not inform him that his wife, Veronica Chavez, and his son Miguelito, who has a disability, were hospitalized in critical condition with COVID-19. .

Fabiola Chavez, Veronica’s sister, lamented: “we did not have the opportunity to leave [Miguel] to know ”about the illness of his wife and son. His lawyer submitted a brief to inform him, but we do not know if this happened.

The son of the political prisoner has been in intensive care since September 15. Due to his neurological problems, COVID has severely impacted him, and his lungs are badly affected. Meanwhile, Veronica is released from the hospital and is recovering.

In 2019, when Miguel Mora was jailed for six months for the first time, his maternal grandmother, Clorinda Barbarena, passed away. He was not allowed to attend the funeral.

Family members of political prisoners held in connection with the ongoing electoral process say neither the courts nor the police have provided them with an explanation for the complete isolation imposed on their loved ones. They launched an urgent appeal, stressing “the imminent risk of irreversible damage to the physical and psychological integrity of our family members”.

Knowing that their loved ones are in a difficult situation is hard enough for the relatives of political prisoners. However, the fact that they cannot see them or find out what is happening to them is “scary”. No rights were respected in these cases. The hearings were held in prison, and the lawyers are able to do very little.

“The pain is choking me. I feel like I can’t breathe anymore, because it’s terrible to feel that someone you love – in my case, two people – is in this situation: locked up, alone, in secret, starving ” , says Pinita Gurdian. “It envelops my emotions, my heart, my hours. I cannot sleep at night; I can’t eat because it’s not easy to spend more than 104 days with one short visit, ”she says.

In her moments of despair, “I turn to my Christian faith and to my family,” comments Pinita. She ensures that all therapies are “unnecessary” when family members are in prison, held in worse conditions than common criminals. “They are innocent of all the charges they want to impose on them,” she repeats. “I ask for freedom for them and for all those who are political prisoners. Freedom, freedom, freedom! Pinita Gurdian concludes.

Fear and loathing: Wild, vivid dreams are more likely if you sleep on your left side