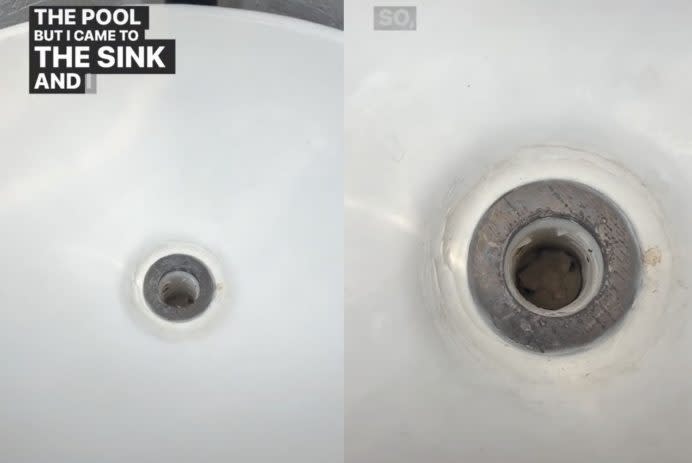 A TikToker was spooked by a creature she found living in her outdoor sink.

Florida-based chemistry professor @chemicalkim shared a video where she asked her 1.1 million followers to guess what the wild animal was. She wondered if it was a lizard, a frog or a snake because she doesn’t live very far from the Everglades. Naturally, TikTok users posted their best guesses.

“With the pool, I thought it would be great to have a bathroom outside,” she said. “There is a shower and, of course, using the facilities without having to come out all wet after being in the pool. But I came to the sink, and I have a boyfriend.

She showed off her outdoor bathroom, which looked rather innocuous. That was until she got closer to the sink. There was a head and a pair of eyes hidden inside the drain, but the little creature didn’t seem to flinch.

The chilling video has racked up 6.2 million views on TikTok.

“That seems like a no to me,” one user said.

“I was holding my phone away from my face because I really thought something was going to pop,” another wrote.

“It is of course my ex-husband. I still wonder where it ended up,” one person commented.

“It’s a nightmare, and I don’t trust the plumbing anymore,” one user added.

Ultimately, most people suspected it was a Cuban tree frog. The pests are invasive in Florida because they can harm other ecosystems, but they’re adorable nonetheless, as noted by one user.

Post-Florida woman finds ‘boyfriend’ living in her outdoor sink: ‘A Nightmare’ appeared first on In The Know.

More from In The Know:

This optical illusion lets you see “true cyan”, a color not visible on most screens

13 Awesome Father’s Day Gifts for Every Type of Dad

Why did Apple remove the Touch Bar from the MacBook Pro? TikTok has a theory

It’s time to break away from Excel

Outdoor play for the mental well-being of children