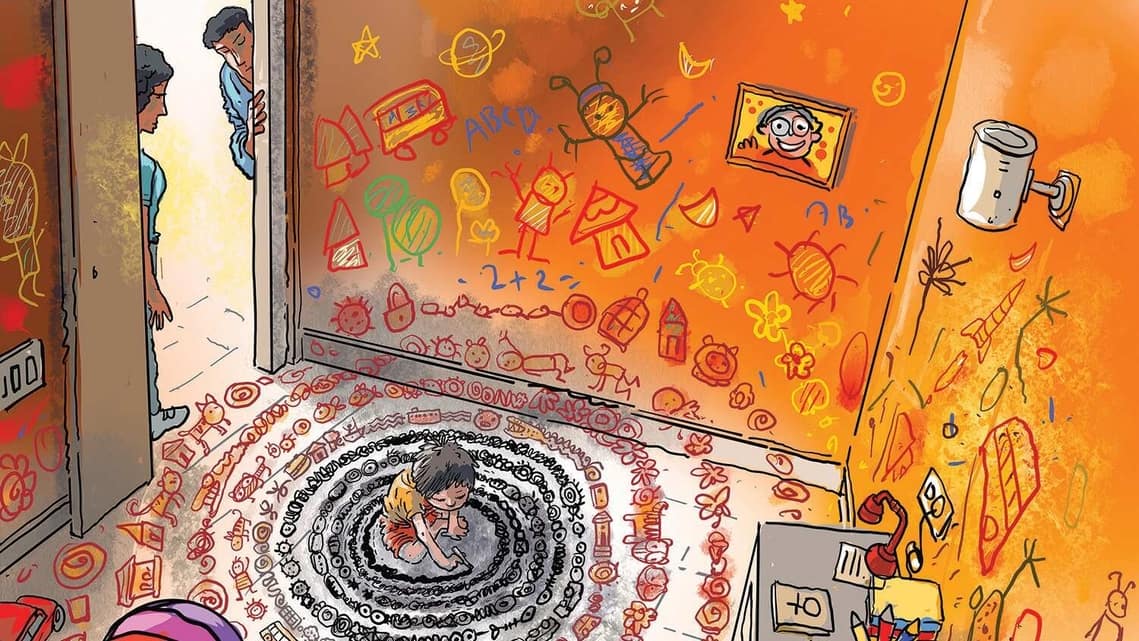 ML, seven, was always shy, but never sad or moody. The class II student, who lives in Gurugram, Haryana, and is part of a large common family, was attentive in class, polite with his acquaintances and happy in the company of his friends and family. That all changed this summer, when the devastating second wave of covid-19 engulfed the country.

His paternal uncle, one of his usual playmates, had to be hospitalized at the end of May. He recovered but within weeks of the diagnosis ML retreated into a shell. He would be distracted in class and extremely quiet at home. Periods of quiet were interspersed with irritability when asked to finish homework or a task. His mother, a teacher, found him awake at night, unable to sleep. In July, he started asking for the lights to be on at night. â€œI still remember the first night he mentioned he was scared in the dark. That’s when I decided to see a counselor, â€she says.

In counseling sessions, he was asked to draw a picture of how he was feeling. The drawings were filled with grays, blacks and browns, with just the lonely figure of a child in an empty house. â€œIt was then that we realized how much the uncertainty of the situation affected him,â€ says his mother.

ML is not alone. According to an article published Aug. 9 by the Center for Infectious Disease Research and Policy at the University of Minnesota in the United States, anxiety rates in children around the world may have risen sharply since the start of the pandemic. (This is) according to the results of a meta-literature review published in JAMA Pediatrics. Researchers looked at 29 general population studies, one of which was not peer-reviewed, and found combined depression and anxiety rate at 25.2% and 20.5%, respectively. Researchers write that the sharp increase was associated with later stages of the pandemic. Until the pandemic, anxiety rates were estimated at 11.6%.

According to the study, one in five children report anxiety. The reasons are multiple: social isolation, loss, financial stressors, disruption and, most importantly, a radical change in routine.

Usually, childhood is a time of exciting new experiences that help toddlers progress towards independence of thought and action. This happens with incidents big and small, like going to school on the bus, making friends, working in a team. The pandemic has turned all of this upside down, resulting in increased dependence on parents.

The assurance of a regular schedule has disappeared. Not all homes are comforting spaces, with children being abused or witnessing acrimony between family members. More screen time, often unattended, also makes children vulnerable to cybercriminals.

â€œI would change the word to emotional hardship. For small children, we don’t have the usual tests but projective techniques by which you can determine if a child is going through an emotional problem. I wouldn’t want to identify it and label it just as depression, but I can call it an emotional difficulty, â€says Khushnaaz Noras, a consultant psychologist based in Mumbai.

In young children, up to the age of seven to eight, parents should watch out for symptoms such as decreased food intake, low self-esteem, and withdrawal from activities they might have. may have liked to do otherwise. Be careful if any of the annoying or peculiar behaviors are magnified. In an already shy child, shyness can be amplified by fears related to the pandemic. â€œI also see many children becoming very distracted. Sometimes parents think this is normal, especially in these unprecedented times. However, it could be a marker of emotional difficulties, â€she said.

Ruchita Dar Shah, founder of the global community for mothers, First Moms Club, has seen messages, often anonymous, from parents about changes in their children’s behavior during the pandemic. There are concerns about mood swings or children snapping when asked a question. Some refuse to go out and play, even when offered a safe environment to do so. â€œThis is reported in all age groups, not just among adolescents, but also among younger people,â€ she says.

For children with pre-existing health conditions, the pandemic has brought new challenges. “We are seeing a relapse or worsening of these problems due to the stress caused by the pandemic”, explains K. John Vijay Sagar, professor and head of the department of child and adolescent psychiatry, National Institute of Health mental and neuroscience (Nimhans), Bengaluru.

According to the study How is the COVID-19 pandemic affecting the mental health of children and adolescents?, published in September 2020 in the PubMed Central repository of the National Library of Medicine of the United States National Institutes of Health, children with neurodevelopmental disorders, including attention deficit hyperactivity disorder (ADHD) and the condition of the autism spectrum (AUC), could fight against the lack of structure and routine during the pandemic. This, in turn, can have an impact on mental health. â€œIn fact, an original study measured children’s ADHD behaviors during the covid-19 epidemic and found them to be worse than their normal state, showing increased irritability and more challenging behaviors,â€ the study says. .

Radhika Nair, a Mumbai-based clinical psychologist, says anxiety or emotional difficulties don’t just reflect sadness. In very young children, whether or not they have a neurodevelopmental disorder, this also manifests as anger. â€œThere is this emotional discomfort and the children don’t have the words to express it. If your child’s behavior has changed – eating very little or a lot, isolating himself, crying over something that may seem trivial to adults, and sleeping a lot – you need to take note. This happens because they are too suffocated and overwhelmed with emotions, â€she explains. Another indicator of stress can be changes in sleep patterns.

Nair recounts cases involving a friend’s eight-year-old son. After absorbing the panic around covid-19, he refused to go out into the apartment complex and began to have nightmares. His mother tried to talk to him but he could not express his feelings. Nair asked him to draw what he was feeling. The child drew elaborate visuals on school closings and changes in his routine. These helped her mother understand her fears. â€œHe was not depressed but had a lot of fear and anxiety. The use of play and drawing is therapeutic and useful in a situation where children do not have words to express what they are feeling, â€says Nair.

Updates on the number of covid-related deaths have been a major trigger. Children now feel stressed about everything they consume in newspapers and TV stations. â€œDo you think the Taliban will come to India? A nine year old girl asked me, a friend of my daughter. “Isn’t covid-19 enough of a problem in the world?” Why are people fighting? “

Dr Vijay Sagar says children in the seven to nine year old age group can have a lot of questions and, if not given the correct answer, can become fearful and withdrawn. â€œVery young children, up to the age of six, can begin to hold on to their parents. When the fear or anxiety becomes severe, one will notice a lingering sadness around some children. Even preschoolers are stressed. Sometimes you will find older children expressing death wishes, â€he explains.

Since the children are locked in the house, â€œthey don’t even have the chance to think for themselves. At school, on occasions such as Independence Day, children can play or recite something. If they forget something, the teacher gives them plenty of time to remember it. But now, with online classes, they only look at parents for reminders, â€says Noras. This leads to a decrease in self-esteem. They keep asking themselves: am I able to do this, or am I okay just because my mom and dad are there?

Noras is currently working with a five-year-old who has a learning disability. â€œEarlier he was saying ‘my teacher did this, my friend did that.’ But now that he’s at home, there’s no one to blame for the hardships. So he turned the emotions inward and thinks the learning difficulty is his fault, â€she says. He has started daydreaming, so much so that he does not answer even when his parents call him. â€œHe sank into his own shell. It can be thought of as a veiled depression, â€says Noras. â€œWhen it comes to emotional difficulties, parents need to be a bit vigilant about what’s going on in the house,â€ she advises. Most of the problems are due to environmental factors in the house and fights between people. â€œIf you see behavioral changes that persist beyond a few weeks, seek professional help. “

Read also | If the anxiety is in the mind and body, what can be done about it?