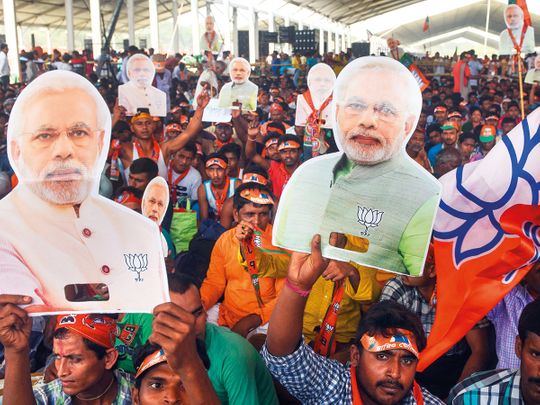 There’s a reason democracies often swing from one extreme to the other in a short period of time. From Obama to Trump in just 8 years, America has looked very liberal and very conservative in a decade. In India, we have seen a Manmohan Singh government weak in public communication give way to a hyper-communicative Narendra Modi government.

There is a simple reason for this: the public thinks in terms of contrast. Black and white. Dark and bright. This or that. Since they usually have two choices, Democrat or Republican, BJP or Congress, an increase in contrast swings voters.

After a long dry spell in the summer, after you can’t stand the scorching heat anymore, come the Indian monsoon rains. We love these rains and even have a word for the smell of rain, petrichor.

It’s the contrast of the dry heat that makes us love the monsoons. We hate the same rains a few days later when our streets are waterlogged and we forget our umbrellas behind.

The power of contrast in shaping our perceptions and desires often goes unnoticed. We are unconsciously shaped by the power of contrast. We see too many action movies and then want to see a romantic comedy. “I needed a change,” we say.

In the narratives that the Bharatiya Janata Party and Narendra Modi present to the Indian voter, they have maximized the power of contrast.

In balmy Goa, which I recently visited to experience Delhi’s contrasting climate, the BJP’s campaign is called “Badal Dista” – meaning “we changed it”. On the left there is a photo of a barren patch of land, on the right a photo of a newly constructed flyover.

There are many such “creations” that not only highlight the achievements of the BJP government in Goa, but put them into context. This produces a contrast. The color scheme used in these posters also serves to highlight the contrast between “Then” and “Now”. The “now” is highlighted in the bright images.

The BJP has been in power for 8 years now, and should ideally face a considerable amount of that curious Indian way of describing unpopularity: “anti-incumbency”. In Goa as across India, one of the main ways the Modi-era BJP retains voters is through the power of contrast.

We are better than the other guy

The idea of ​​contrast is used in many ways. One is to create a sense of “pro-incumbency” to persuade voters that the BJP has opted for development or welfare which was absent before. Another way to use the power of contrast is to say that despite all its flaws and failures that critics may point out, the BJP remains a better option than its opponents.

We see this second type of contrast in full swing in Uttar Pradesh, where the BJP has been in power since 2017. The BJP’s narrative for re-election seems to be entirely about being better than the Samajwadi party. This contrast that the BJP wants to create seeks to negate any sense of anti-incumbency. The Samajwadi party can talk all they want about inflation and unemployment, but the BJP explained its 5 years as a contrast to the previous 5 years.

It’s not hard to beat. All the Samajwadi party or any other opposition party needs is to use the power of contrast to their own advantage. The Samajwadi party could come up with its own contrasting creations to claim that the situation has deteriorated since 2017.

If this strategy works so well, it is because it manages voters’ expectations rather well. He avoids the pitfalls of the BJP’s “India Shining” campaign in 2004, which led to defeat. Many disgruntled rural voters disagreed.

If you just say you built this highway, a voter might say, “So what? All governments build highways.” Instead, if you say, “My opponent wasn’t building that highway!” He did not want development in this area! I finally got this highway built! then your argument becomes persuasive. You now become reluctant to bring the previous guy back to power.

Many Congress party supporters often wonder: why does the BJP attack Rahul Gandhi so assiduously when they also claim he is irrelevant? How can both things be true? It seems a bit strange that the BJP is so obsessed with an opponent that hurts so badly that they can’t even keep their family pocket borough in Amethi.

The BJP wants to ensure that the distance between Narendra Modi and Rahul Gandhi is so great that even in the worst case scenario, Modi wins over Rahul. This distance is created by contrast and this contrast is not only created by making Rahul Gandhi look bad.

After the failure of demonetization in 2016, the BJP launched an excessive attack campaign against Congress, attacking everyone from Jawaharlal Nehru to Manmohan Singh. The idea was again to continue to focus on the faults and failures, misses and mistakes of the Congress party, to make the BJP’s own failures look less serious. Contrast, contrast, contrast.

Again, all Congress has to do is play the game of contrasts on its own terms. Rahul Gandhi made some of this in his speech to parliament earlier this week, where he said Congress had lifted millions out of poverty and the BJP had only increased inequality.

Similarly, the BJP line of attack that Congress did nothing in the 60s-70s can also be answered in contextual contrast. To appreciate what India has achieved since 1947, we will have to see things in contrast to what 300 years of devastating colonial rule left us.

Shivam Vij is a New Delhi-based journalist and political commentator. He tweets as @DilliDurAst, the handle means “Delhi is still a long way off”