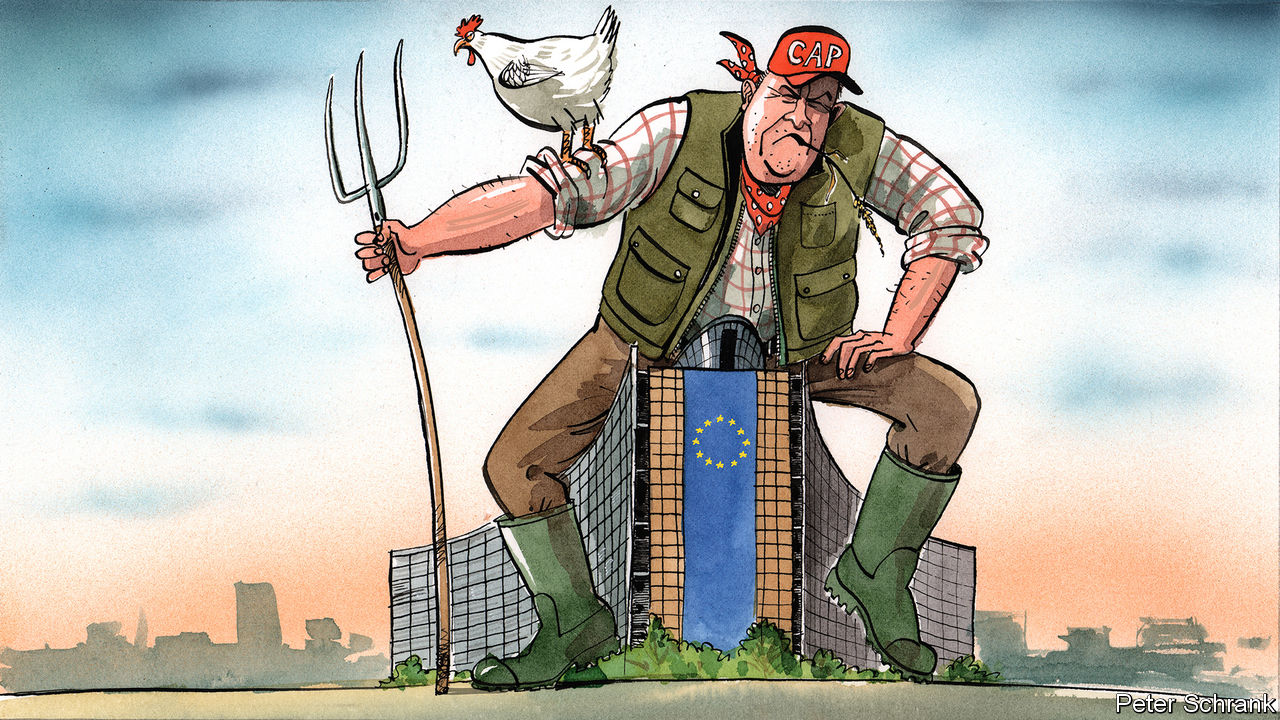 ARMED WITH a device designed to throw tennis balls for dogs, it is possible to throw an egg to 60 yards very satisfying. Head to the Leopold Quarter in Brussels on the right day and you can see farmers from all over Europe pulling a wide range of produce from an impressive distance at Belgian riot police. It is during these regular events at the headquarters of the European Union that the ingenuity, bravery and diligence of the European farmer are truly manifested. In one episode, a pair of tractors slowly passed through a barbed wire barricade, as the cops dispersed. When an armored police van arrived, the farmers also entered there. It took two water cannons at full throttle to reverse the tractors. Over the years, grumpy farmers have covered the stoic Belgian riot police with hay, eggs and milk straight from the udder.

Enjoy more audio and podcasts on ios or Android.

A riot can be the voice of the unheard of. It can also be a tantrum for the ridiculously privileged. European farmers are politically powerful in the same way the sky is blue: it is a fact so universally recognized that it is generally not worth mentioning. That power was evident this week in the final negotiations between diplomats, members of the European Parliament and officials on the terms under which farmers will receive 270 billion euros ($ 330 billion) in 2023-2027. That the farmers get the money is obvious. The debate revolves around the number of conditions that will be attached, with the options going from little to very little in fact.

The common agricultural policy (CAP) is a tumor in the EUthe body politic. Aspiring a third of the group’s budget, it is a fine illustration of its struggle to change for the better. What started six decades ago as misunderstanding between France and Germany (bung breeding in exchange for market access) is still in place. It’s a strange form of redistribution. About 20% of the farms receive 80% of the money. The aristocrats, the agri-giants and the Catholic Church all take a juicy part. Companies linked to Andrej Babis, the billionaire Czech prime minister, have raised 34 million euros ($ 42 million) per year. The money is transferred from European taxpayers to landowners, in a frankly feudal farce. Usually it is said that things will get better. This time the European Commission gave up. “We must recognize that there will be no revolution in the CAP», Said Frans Timmermans, the Commissioner responsible for making Europe greener.

History is littered with once powerful interest groups that have vanished. Coal miners in Germany and Poland will receive money as their industries are phased out as part of the “just transition” plan to a green economy. But that equates to a free bar to a wake. In contrast, farmers remain more powerful than ever. This is in part due to the nature of the food. People care more about what they put in their mouths than how they heat their homes or the bodywork of their Audis. Unlike coal or steel, food is not really fungible. An Italian can reject a tomato from Spain, let alone a tomato from Morocco or a genetically modified American. For a continent without a common language, snobbery about local products provides a universal language.

The way that the EU prepare an agricultural policy that helps farmers retain their inordinate power. Normally, policymaking in Brussels is a mess, with everything for sale at the right price. Officials in countries haggle with each other, going to one topic to get what they want on another file. As a system it is opaque, but it works. On the other hand, agriculture is isolated from other subjects of bargaining, isolated in its own special committee. The result is that governments are trying to get as much money back as they can, rather than wondering if it should be there in the first place.

For all the speeches of the EUdemocratic deficit, agriculture is an area where the EU suffers from a surplus of democracy. Blind-eyed technocrats would gladly cut agricultural subsidies. European politicians will not let them do it. In France, any self-respecting presidential candidate must spend time sniffing out cheese at agricultural fairs. Agriculture generates barely 1% of GDP. But his fate is of disproportionate importance. Rather than left or right, the political battleground in much of Europe is a struggle between urban centers and the rural periphery. Britain’s exit eliminated one of the few major governments that was less sensitive to the future of agriculture (as evidenced by its current enthusiasm for free trade deals with agricultural powers like the ‘Australia). For most EU, cutting subsidies would be an attack on a politically powerful rural hinterland. It’s a fight that few people want to have.

Fortunately, some do. Greta Thunberg, a young Swedish climate activist, joined a cabal of NGOs hammering it EU for not doing enough to reduce the effects of agriculture on the environment. For the moment, whatever the ambition of the EU a for climate policy wears off when it comes to agriculture, even though its emissions rival much heavier industries. Farmers can no longer brush aside their worries. Environmental policy has shifted from the workhorse of sandal wearers to an existential political debate. Now farmers will have a fight in their hands. Things can get better. After all, the CAP was even worse. Gone are the days when European taxpayers paid to overproduce products that were then thrown away in poor countries. But it took years of concerted campaigning to move the mountains of butter and the lakes of wine.

It is too late to tell the difference this time around, as talks about the 270 billion euros come to an end. A slow fight by people like Ms Thunberg is needed if the CAP needs to be revised. Making sure farmers are doing their part for the climate and stopping the transfer of money to those who don’t need it would be a start. The history of European policymaking is one of path dependency in which mistakes take years (and usually a great crisis) to dissipate. Until then, the CAP will remain a scar on the EU, a visible reminder of the difficulty in fixing the mistakes of the past. If it ever seems to be fixed, it will be wise to avoid the EU Brussels district. Imagine how grumpy farmers will be if they really lose for once. ■