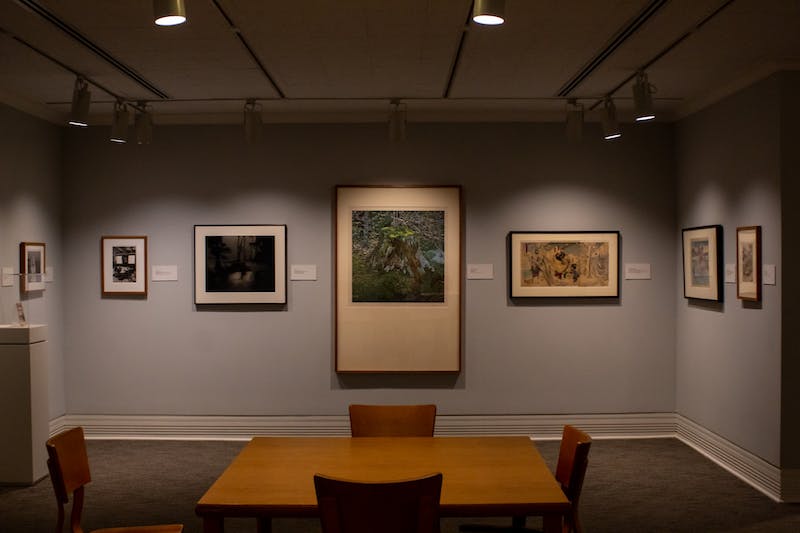 A brief climb to the second floor of the Ackland Museum of Art leads museum visitors to Ackland Upstairs, an evolving exhibit where the art changes every eight weeks.

The space, separated into galleries, contains works of art by different artists – all from different mediums. The current facility opened on January 10.

Many galleries have been curated by UNC professors alongside their classes.

Martin Johnson, associate professor in the Department of English and Comparative Literature, teaches “History of Cinema.” On Tuesday, he took his class to the exhibition.

He made sure to include film posters from the late 19th to early 20th century for his students to analyze. Her gallery includes several works of art, such as a satirical Guerilla Girls poster for a fictional film called “The Birth of Feminism,” which features images of Pamela Anderson, Halle Berry and Catherine Zeta-Jones portrayed as Gloria Steinem, Flo Kennedy and Bella Abzug, respectively.

“I wanted my students to find out what movies the posters are for, but also to think about posters and artwork and what it means to think of a poster as art as opposed to advertising. or just as a sort of reservoir of information,” Johnson said.

Johnson said her class focuses on the history of film and film culture on a global scale.

“There is an absence of black female figures in art except as objects to look at,” Randolph said.

“Another way to think about black feminist creative expression is to look at visual arts and the most direct inspiration for using visual arts,” Randolph said.

Randolph said she wants students to think about what it’s like for black feminist artists to try to portray themselves in portraiture.

In addition to students learning about different representations of black women in art, the class paints self-portraits, Randolph said. She wants her class to think about the idea of ​​what it means to represent oneself or to be represented by someone else.

Galilea Jones-Valdez, a first year in Johnson’s “North Carolina Black Feminisms” class, said she painted a self-portrait in the style of an animated character with large, exaggerated eyes. She was inspired by the visual style of Disney’s animated characters.

One feature she wanted to include was the moles on her face.

“People might not notice them, but I love them,” Jones-Valdez said.

Jones-Valdez said her classmates experimented with colors and abstract art, noting that everyone’s self-portrait would differ depending on what they like about themselves and want to highlight.

“Working with these visual arts is kind of a dream come true,” she said.

The current Ackland Upstairs facilities will be on view until March 20.

To get the day’s news and headlines delivered to your inbox every morning, sign up for our email newsletters.

The invasion of Ukraine will not affect Putin’s popularity in Russia, but it is hardly sustainable