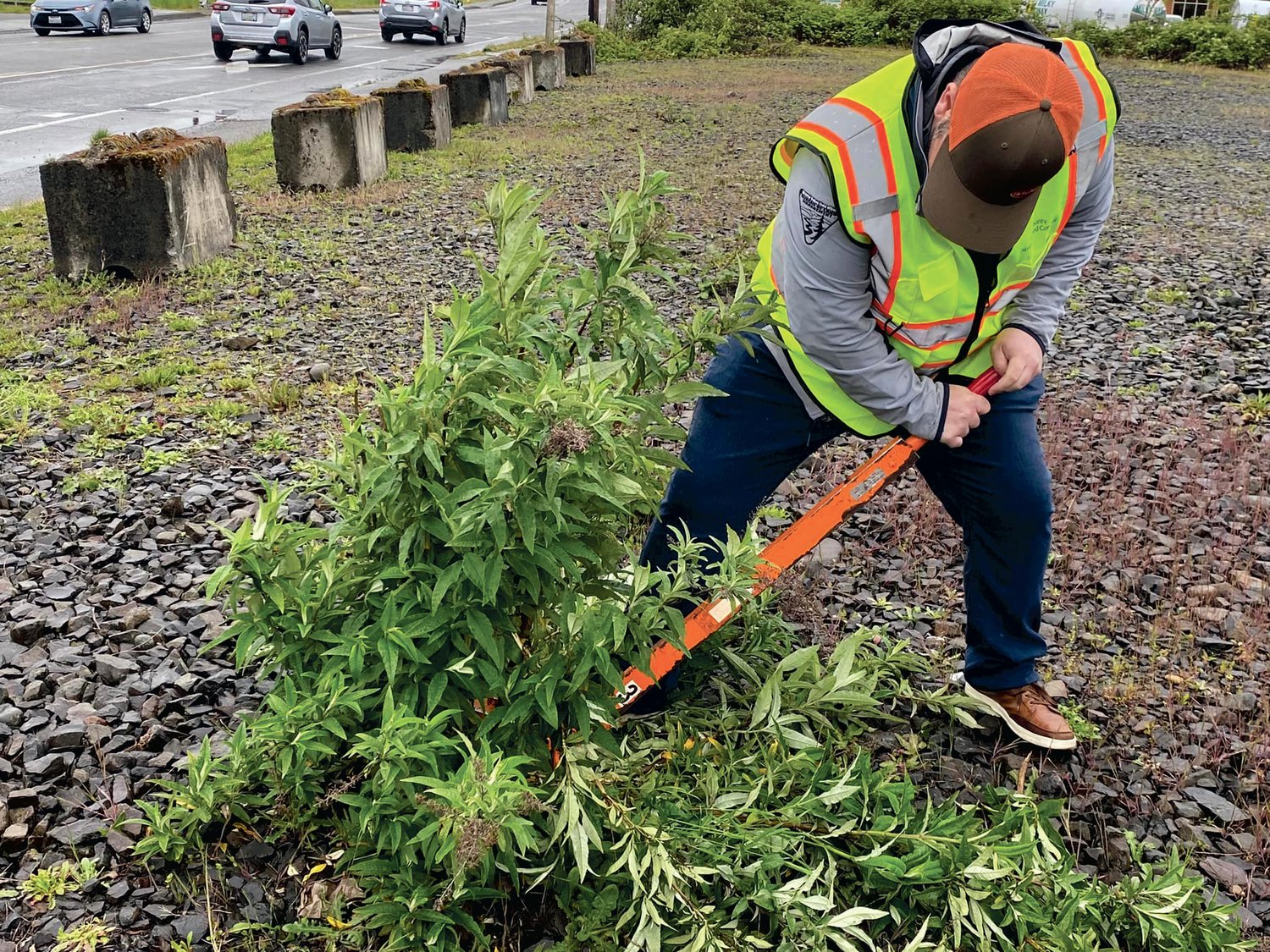 By Carrina Stanton / For the Chronicle

As the weather warms up and people start to come out, the Lewis County Noxious Weed Control Board hopes they’ll help keep an eye out for problematic weeds causing trouble in the community.

The steps can be as simple as walking around your property, spotting problem plants in public areas, or even cleaning your boat and fishing gear. But each of them can have a big impact on the overall health of the environment and the economy.

“Noxious weeds specifically require people to work together across property lines and jurisdiction,” said Lewis County Noxious Weed Control Board program coordinator Charles Edmonson. “If one person allows them to spread, they can affect anyone.”

In Washington, controlling the spread of noxious weeds is the legal responsibility of landowners. The Lewis County Noxious Weed Control Board is established and governed by the larger Washington State Noxious Weed Control Board as outlined in Revised Washington Code 17:10. According to the RCW, landowners can actually receive civil violations and fines of up to $1,000 for failing to control the growth of noxious weeds.

“Noxious weeds are a term,” Edmonson explained. “It has to be on the list. We have our own list of counties, but a lot of it comes to us from the state.

The reason the state has weed control laws dating back to 1881 is that if left unchecked, invasive weeds can cause real financial damage. It is estimated that each year in Washington, noxious weeds directly impact $239.5 million on crops, $120.1 million on livestock, $124.8 million on timber, and 20.5 million dollars on recreational activities such as hunting, fishing and boating.

In Lewis County, where lumber and agriculture thrive, they can be particularly devastating. A patch of tansy ragwort growing near pasture can kill livestock. A few Scotch broom weeds allowed to thrive near a Christmas tree farm can quickly muscle up young trees.

“Nobody wants poison hemlock in their hay. Nobody wants tansy to get to their cows. It takes a community to make sure that doesn’t happen,” Edmonson said.

“If you have knotweed next to your house, it can affect your foundation,” Hall-Wieckert said. “And if it’s next to your septic system, it can get in there and cause all kinds of problems.”

Noxious weeds are classified into three categories in Washington. Landowners are required to completely eradicate all Class A weeds from their property. There are currently 37 Class A weeds which include: milk, slenderflower, Turkish and Italian thistle; Kudzu; clary sage; watermilfoil; Centaury Vochin; and smooth and salty meadow cordgrass. Landowners may be required to control Class B and C weeds depending on their extent in each county. In Lewis County, the Noxious Weed Control Board adopts a county weed list each spring that delineates the weeds that are high priority.

“We try to offer as much assistance as possible and education but obviously at some point there is a legal obligation,” Edmonson said.

Weed specialist Danika Davis said her office wants to work with landowners to stop the spread of noxious weeds and offers resources to make the effort a little easier. Lewis County Noxious Weed Control Board staff will be conducting site visits to help landowners identify the noxious weeds they have and the best methods to eradicate them. They also interact with the public via social media, offering weed identification through photos. The office offers a growing list of tools that can be loaned to residents, such as a weed wrench to pull Scotch broom up by the roots, and will soon offer knapsack sprayers and injectors for targeted knotweed poisoning. Each year, the Noxious Weed Control Board also offers a Stewardship Incentive Program that can help reimburse homeowners for the cost of controlling noxious weeds. Twenty-one local homeowners have been chosen for the program this year, which will pay out a total of approximately $10,000 in reimbursements.

The Lewis County Noxious Weed Control Board also offers weed-free certification for hay and mulch for those who sell these agricultural products. This designation by the Washington State Department of Agriculture is now required for all products used on U.S. Forest Service lands nationwide and is becoming a more common requirement in order to transport these products across borders. of State.

“It’s a great way for people to make more money from their products,” Edmonson said.

The Noxious Weed Control Board also makes appearances at local events to educate the public on how it could be spreading harmful weeds without knowing it. For example, Scotch broom seeds can remain viable in the ground for 60-80 years, which means homeowners may also see an explosion of noxious weeds when they cut down an area or cause major soil disturbance. And water-related weeds such as watermilfoil can hitch a ride on boat propellers, so cleaning your boat thoroughly between trips can reduce choked waterways, as can refraining from emptying your aquarium in blueprints. local water. And when working in the garden, make sure noxious weeds don’t end up in the compost heap where they could still scatter seeds.

Mid-summer, when everything is in bloom, is when the Lewis County Noxious Weed Control Board typically gets the most calls from landowners wanting help identifying and treating weeds. invasive species on their property. But the best time to start the process is in the spring or early summer, when the weeds are just starting to emerge from the ground and many have not yet flowered or gone to seed. It’s important to understand what kind of noxious weeds they have and use the best-known methods to kill them. For example, many people like to mow noxious weeds, but sometimes this can cause them to spread even further.

“(Edmonson) likes to say there’s no magic bullet,” Davis said with a laugh of how to deal with noxious weeds.

“It’s never that simple,” Edmonson added. “No grass is on this list without being very difficult to kill.”

The Revised Washington 17:10 Noxious Weed Code can be viewed at app.leg.wa.gov/RCW

The Lewis County Noxious Weed Control Board will be hosting free tansy drop-off days. Owners may bring bagged ragwort (loose tansy will not be accepted) and the council will cover disposal costs.

The deposits will be:

Additional tansy deposition days will take place on July 29 and 20. Watch the Noxious Weed Control Board website or social media for a timeline closer to the date.

How to Improve Personal Loan Applications: 6 Ways to Increase Chances of Approval