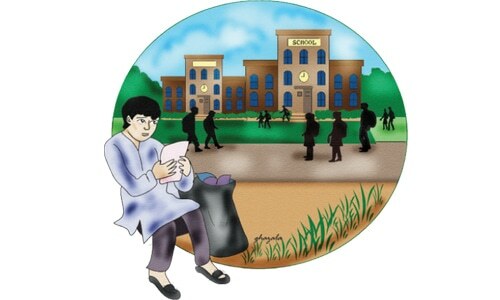 Something kept tormenting him in his heart: the desire to learn, to go to school. This annoyed him so much that he started trying to read newspapers thrown away by people who had already read them.

His name was Noman. He had bright hazel eyes and a round face. He was no more than five years old when he started picking up trash with his father. They were so poor that they often had no money for food. But Noman was not ungrateful like most children his age. In fact, he was happy with his life and didn’t complain about anything. But he just felt that something was missing – a dream, a goal.

One day, Noman was picking up trash in the streets when he saw some boys. Unlike his filthy, dirty clothes, they were all dressed in gray and white uniforms, with brightly colored bags and shoes. Noman’s eyes twinkled as he saw them enter a tall building nearby.

Noman continued to watch them for some time, but was distracted when his father called him for work. After finishing his work, Noman began to feel thirsty, as it was very hot. He asked his father for water, who told him to go and ask someone in the houses on the street for water. So Noman went door to door asking for water to drink on a hot sunny day. Most people gave excuses and closed the door.

But then a kind and understanding man handed her a bottle of water. Noman took the bottle back to his father and they both sat down in the shade of a tree and drank some water. The sun was at its zenith and the day was exceptionally hot. Then all of a sudden, the uniformed boys he had seen earlier came to mind.

“Father, have you seen those boys who just passed by?” Do you know who they are?” asks Noman.

His father finished drinking water and replied, “What do you have to do with them? They are the children of rich people who have shiny cars and good food. The place they were going to is a school. They go to study books and many other things, but it takes a lot of money. Why do you ask?”

“Nothing, I was just wondering! Noman said with a heavy heart. Then he saw his father stand up with a grunt. Noman also got up and walked beside his father. He remained pensive because he knew his parents didn’t have enough money to send him to this strange but amazing place called “the school”. But he couldn’t control the desire in his heart to go.

From that day on, Noman always stopped and watched the school building and all the kids coming in and out, joyful, discussing various things he knew nothing about. And his heart still hurt and annoyed him, but he still ignored it, thinking he wasn’t meant to be there.

The days have passed. On a hot sunny day, Noman saw a piece of paper on the floor. He picked it up and sat down at the side of the garden near the place he was cleaning. He studied the letters carefully.

“Pakistan”, he was trying hard, but he just couldn’t read it properly. It was then that he heard a voice.

“Hey garbage man! Don’t try anything too complicated for you. Clean my shoes instead, that would be easy!

Noman looked up. They were the same boys he was used to seeing go to school. They smiled wickedly. Noman remained silent and put the piece of paper aside, but refused to clean the boy’s shoes.

He picked up the trash and put it in the big bag he had put aside. The boys were still there.

“You don’t want me to complain about you to my father. Clean it up, quick! he chuckled wickedly.

At that moment, someone came forward, a tall, sturdy man.

“Oh, Professor Ahmed! How are you?” the boy looked around and asked awkwardly, trying to change the subject in case the teacher heard what he said.

“I just heard what you said to that poor boy. I must say that I am deeply disappointed. How can a student of mine do something like this? Math comes after manners. No manners, no education. Learn to respect others! he thundered.

The boy was ashamed and said sorry to Noman and ran away with his friends. Professor Ahmed looked at Noman and asked him if he wanted to study.

Noman blurted out everything – how he never got to go to school, how he tried to read fallen papers, and how he always dreamed of school and education.

Professor Ahmed said, “How about I teach you all the subjects?”

Noman smiled, but faded suddenly. “But I don’t have any money,” he said.

“It’s okay. I’ll teach for free and bring you all the books and stationery you need. I’ll teach you every day after I get home from school. What are you saying?”

Noman couldn’t believe his ears. He was so happy and excited that all he could do was nod in disbelief. Then the teacher asked Noman to take him to his parents.

Professor Ahmed asked his parents for permission to teach their son. They couldn’t believe their ears and easily accepted. They also added that Noman no longer had to help his father, but Noman insisted that he would like to help his father in addition to studying. It was then agreed that Noman would come to the teacher in the evening and study.

Noman studied with all his might. His dream was finally coming true. Professor Ahmed saw his efforts and decided to get him admitted to the school.

Noman was thrilled the day he joined the school. He vowed to show the world that he could be a brilliant student. He studied hard and always got one of the top places in his class.

Due to the excellence of his studies, Noman began to obtain scholarships and his education became free. He was easily admitted to a good college, then to university and eventually made his parents and teachers proud by becoming a doctor. Noman worked in a good hospital and opened an NGO for those who want to study but cannot afford it.

Men have it too