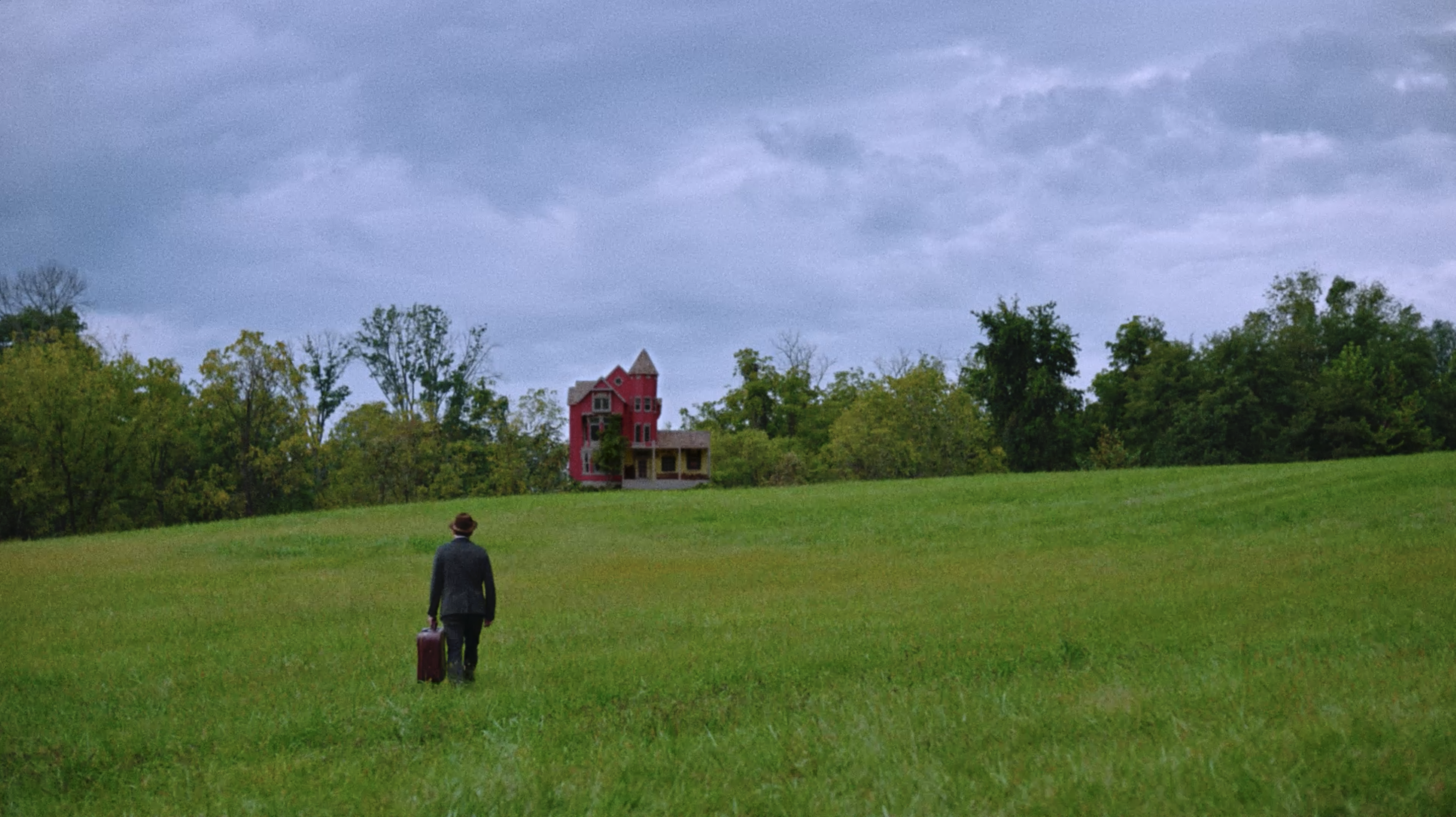 ‘Strawberry Mansion’ Review – A Whimsical and Heartwarming Journey Through the Subconscious

What if your dreams weren’t yours? The very thing that humans have been free to create unconsciously and consciously is no longer a private and unique experience. The very Charlie Kaufmanesque strawberry mansionwritten and directed by Kentucker Audley and Albert Birney, explores this strange world reminiscent of Ray Bradbury’s novel, Fahrenheit 451, in which government surveillance has become rampant, but make no mistake. The film is not quite a nightmare. It’s a fantastic journey of love and the eternal spark of creativity within humanity. The interwoven romance throughout the story that takes center stage is, truly, the stuff of dreams.

In the not so distant future of 2035, our dreams are taxed by the government. James Preble (Kentucker Audley) is an overworked dream listener. He spends the majority of his waking hours sifting through other people’s dreams to find out how much money they owe the government. His own dreams are almost formulaic, anxiety-riddled nightmares where he spends most of his nights desperately searching for something he never has, only to have a friend known simply as Buddy arrive, in no time, carrying the exact gifts needed. James is sent to audit the dreams of an older, eccentric woman named Arabella Isadora, played wonderfully by Penny Fuller, who lives in a large and unusual house known as the Strawberry Mansion. Her liveliness and her home become an oasis for James. As he travels through Bella’s dreams, he observes her young personality, played by Grace Glowicki, and something unlocks in her mind. He soon finds himself lost in a strange mix of Bella’s dream world and his own, leading him to question his own reality.

Kentucker Audley shines as James Preble and brings him the same quiet confidence present in previous works like his sweet film, Christmas, Again. He is sweet and gentle with sad eyes. Even though the character of James seems to be locked in the repetition of everyday life, there is a sense of yearning for something more. The world is boring to him, but he has no reason to question it. Not thinking outside the box has brought him success financially, and he has food and shelter, so what more does he need? Bella’s home and land are alive and vibrant, a stark contrast to the life and town James has just left, so he is restless from his intimidating sleepwalking through life.

Some of the best movies are the ones that are the most ambiguous or thought-provoking for the audience. It’s definitely one of those movies. At its core, the theme of isolation and loneliness resulting from the control and manipulation of thought in a world that does not nurture creativity and original thought is ever present. Losing the natural beauty of the world right in front of us is a devastating blow to humanity. Bella mentions to James after working with her for a few days, “I just wanted someone to share my dreams with.” She’s a dreamer who lives a more authentic life in touch with her creativity and passion outside of the mind-controlled society James comes from, but she’s been punished for her unbridled imagination by being forced into some kind of exile. She’s been misunderstood all her life, and even when she was married, it was very one-sided with a man who never bothered to learn the other sides of her brain. James immediately has a connection with the wildest, most untamed version of herself and a love is born from that connection. The whole reality is so surreal that it almost seems like James has been living in a dream his whole life, and the only time anything has been real is when he’s been spending time with Bella – in and out of his homes. dreams. Everything is like a dream within a dream, which makes this film all the more beautiful. Perhaps he was always drawn to her in this giant dreamscape. There are so many lives that can be lived in the dream space, and this love flows through each of them.

Once James’s eyes are opened to this technicolor world, he is unable to turn back, but the old world still grips stubbornly at his feet, desperately trying to pull him back at every turn. Bella and James must embark on a seemingly endless journey to find their way back to each other, and Audley and Birney effortlessly fuse the genres of sci-fi, fantasy and adventure to form an enchanting tale. and moving. Where it’s easy for movies in this multi-genre to get too bloated and cryptic, strawberry mansion just dabbles in trippy and doesn’t prolong the story any longer than necessary, clocked in at a concise ninety-one minutes.

strawberry mansion is a whirlwind of dreamlike logic. The story sometimes seems to wrap around itself, but that’s not necessarily a downside. Dreams are often meaningless and the stakes made up are always higher than they would be in reality. Audley and Birney bring that intensity and anxiety along with the staggering feeling of having the lingering emotions and ideas of a dream linger and nag you through your waking hours at the movie. Characters are constantly racing against the clock to find specific and often random pieces of a puzzle in order to achieve some sort of safety. It’s something most of us have experienced when we dream. “Ah, yes, of course, the only way out of this free-falling plane is a levitating potato that I accidentally stuck in my bag.” Some viewers may find it disorienting or hard to follow, but it’s well worth the trip down the rabbit hole.

This film was a pleasure to experience visually. It was shot digitally but then given a 16mm film transfer, giving it a blurry, dreamlike quality that perfectly matches the story being told. Heat radiates through the screen. The production design also sometimes has a Wes Anderson feel with bright, pastel colors and quirky architectural designs. Practical effects were used to give the film a more tactile experience and a childish lens and also seem to be heavily influenced by 80s fantasy films. The wide shots that take place in Bella’s dreams are beautiful and vivid. While the “real world”, far from Strawberry Mansion, is a barren wasteland of sidewalks, gray buildings and drab billboards, surrounding the city. It’s easy to immerse yourself in this new reality from the start of the film.

strawberry mansion artistically explores the fear of mind control and what it would be like to live in such a world. The innermost thoughts and desires are mined and exploited for money, and humans are manipulated into becoming good consumers. There is no way to find peace. It is not too difficult to understand where the inspiration of the filmmakers can come from. Dive headfirst into the whimsical and bizarre side of life with this film. It’s like a new tale of The Odyssey wrapped in a futuristic fairy tale and a dazzling feast for the senses that reminds us that if we lose our dreams, we risk losing who we are. This one is not to be missed.

strawberry mansion is currently playing in select theaters. The film will be available digitally from February 25, 2022.

When I’m not daydreaming or having an existential crisis, I can usually be found watching a movie or TV, listening to music or a podcast, or reading a book.