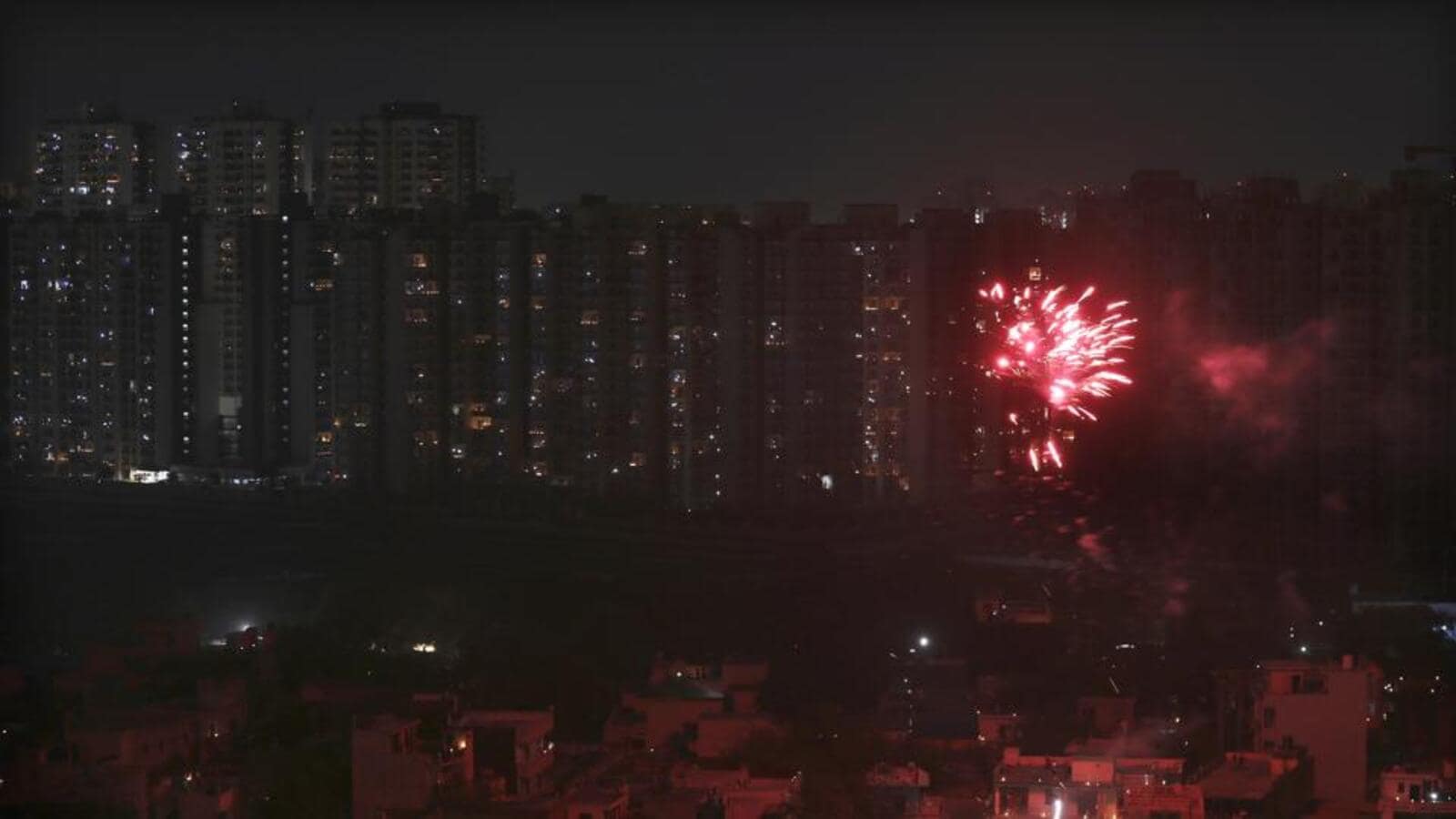 Being exposed to smoke from firecrackers is equivalent to smoking hundreds of cigarettes in minutes and the chemicals in the smoke not only cause immediate breathing difficulties and skin irritation, but in the long term could even increase the risk. of cancer, according to several scientists.

Every year on Diwali, the concentration of ultrafine PM2.5 particles containing a variety of heavy metals and toxic chemical compounds multiplies between the evening and the next morning as people set off firecrackers. For example, in 2021, the concentration of PM2.5 went from an average peak of 234 micrograms per cubic meter of air (ug/m3) the day before to 729 ug/m3 at 3 a.m. after the celebrations, which included the widespread use of fireworks. illegally.

However, these are average levels of recordings at the monitoring stations. What they don’t capture is the intensity and effects of acute exposure when the firecrackers are ignited.

“We conducted a study in 2020 in Delhi to verify PM 2.5 readings indoors and outdoors on Diwali day. While the concentration outdoors ranged from 1,200 to 1,400 ug/m3, indoors, where levels were around 70 to 80 ug/m3 the day before, they reached around 500 to 700 micrograms per meter cube,” said Dr. Arun Sharma, President of the Society for the Indoor Environment (SIE).

India’s Central Pollution Control Board considers a PM2.5 concentration above 40 ug/m3 to be dangerous. The World Health Organization (WHO) sets the safe threshold even lower, at 5ug/m3.

Exposure to such high levels is particularly dangerous for people already suffering from diseases such as asthma and people in vulnerable age groups, such as children and the elderly. But, added Sharma, this high concentration does not even spare healthy people. “The impact on non-vulnerable groups is seen more in the long term and is often linked to lung damage,” Sharma said.

Among healthy, one-time firecrackers and general city-wide ambient pollution may not cause the same damage as for vulnerable people, but even they are at high risk if they are near firecrackers for long enough, said a second expert, Dr. Ravindra Khaiwal, professor of environmental health in the Department of Community Medicine and School of Public Health at the Postgraduate Institute of Medical Education and Research (PGIMER).

“We usually categorize people into two groups. The vulnerable group is the one that includes children, pregnant women, the elderly and people with comorbidities. Here they can have short-term effects such as upper respiratory irritation, skin infections, breathing difficulties, and severe cases of asthma. Healthy people can also see such symptoms, but it depends on the period of exposure and the concentration dose, which is usually very high on Diwali and can range from 500 micrograms per cubic meter to 1500 micrograms per cubic meter,” he said. said.

A scientist from the Council for Scientific and Industrial Research (CSIR) provided a more detailed picture of the potential short- and long-term damage. “Firecrackers mainly consist of four main ingredients – an oxidizer, a fuel, dyes and binders – and each of them has a different impact on human health,” said this person, asking not to be named because of the social and political divisions on the subject. use of firecrackers.

“Nitrates and chlorates are most often used as oxidants. Aluminum compounds, barium nitrates and copper are used as colorants. Metals are also used to regulate the rate of reaction in various fireworks,” this person said, before explaining how these families of elements and compounds affect humans.

“Antimony sulfide, the chemical compound that produces the glitter effect, is a known carcinogen. In the short term, they trigger a feeling of nausea and in the long term, they can cause cancer. Similarly, aluminum, which burns as white light, leads to contact dermatitis and bioaccumulation. Barium nitrate and lithium compounds have the most toxic impact as they immediately cause respiratory problems.

Khaiwal made similar warnings. “NOx (nitrous oxides) are released by firecracker emissions and nitrates can cause mental disorders. Magnesium in firecrackers can cause metal fume fever (a common condition among welders), cadmium causes anemia and kidney damage, zinc can cause nausea and vomiting, sodium and salts in firecrackers cause skin irritation and rashes, and copper causes respiratory tract irritation. ,” he said.

Khaiwal was one of the principal investigators of a study published in the Atmospheric Environment Journal entitled “Long-term assessment of fireworks emissions and air quality during the Diwali festival and the impact of 2020 Fireworks Ban on Air Quality in India’s Indo-Gangetic Plains Airshed States.” He found that during Diwali celebrations between 2017 and 2020, particulate matter and SO2 were the main emissions emanating from fireworks into the atmosphere.

Another way to look at emission intensity is simply to look at the amount of PM2.5 particles generated during the burning time of different firecrackers. A study by the Chest Research Foundation, Pune in 2016 found that burning an ‘anaar’ (a flowerpot firecracker) exposes a person standing nearby to 4,860 ug/m3 of PM2.5 particles on a duration of three minutes. The ubiquitous sparkler, also known as ‘phooljhari’, releases 10,390 ug/m3 of PM2.5 and a ‘ladi’, or a string of firecrackers, spits out 38,450 ug/m3 of PM2.5, equivalent to emissions generated by 1,752 cigarettes.

A second study involving the use of firecrackers detailed the damage from a clinical perspective. Researchers from the Department of Medicine at Maulana Azad Medical College (MAMC) surveyed 788 Delhi residents before and after Diwali in 2017, with 223 people also undergoing lung function tests on a random basis.

“Comparison of complaints of respiratory illnesses before and after Diwali showed that there was a significant increase in cough complaints after Diwali among Kotla participants (6.7% vs. 28.9%),” said the study, led by Mradul Kumar. Daga, director-professor in the Department of Internal Medicine and Center for Occupational and Environmental Health at MAMC.

The study, which investigated neighborhood-based clusters, found that after Diwali, residents of one such densely populated residential area, Kotla, reported more cases of fever and fatigue. “Nearly 6.7% and 37.1% reported fever and fatigue.”

Other clinicians said their experiences were consistent with the results. “We see coughing, wheezing starting immediately in these groups on Diwali day and around the week after Diwali there is an increase in the number of asthma attacks, bronchitis, pneumonia and people developing a persistent cough “said Dr Vikas Maurya, Director and Head, Pulmonology and Sleep Disorders at Fortis Hospital, Shalimar Bagh.

“When the concentration is this high, these are levels that go beyond ‘severe’ and while vulnerable groups such as the elderly, children and pregnant women are advised to be cautious when the AQI is in the “very low” category or worse, even healthy people would be impacted. This is the same case on Diwali day and all age groups are badly affected. There is a serious health emergency related to Diwali and the pollution outbreak caused by firecrackers,” said Anumita Roychowdhury, executive director, research and advocacy at the Center for Science and the Environment (CSE).

Remembering grandma, her plea and her stubbornness