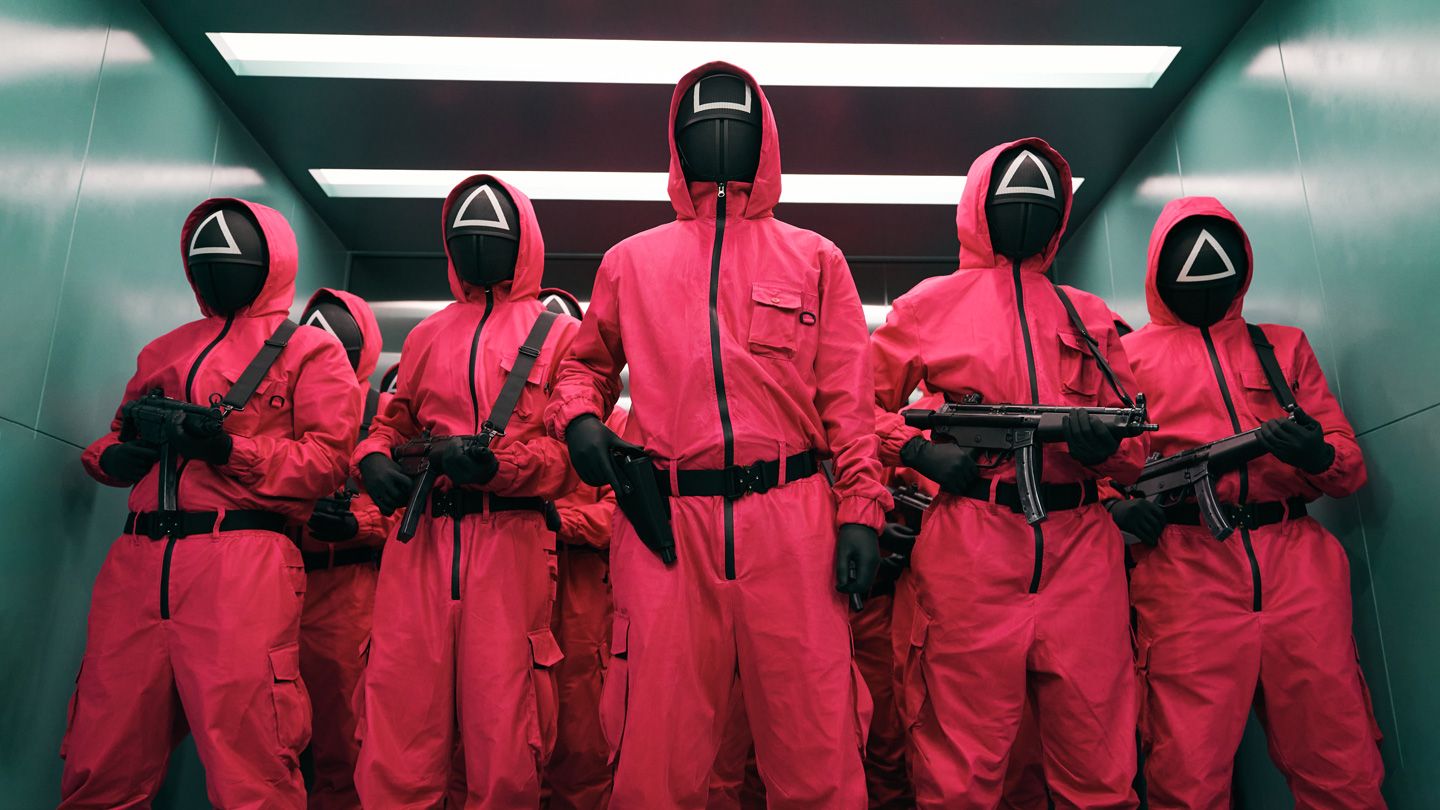 Why “Squid Game” gives you nightmares

Childhood games with violent twists and turns, an army of shadowy masked men wielding guns and ordinary people on the verge of financial ruin fighting for their lives – the premise of the popular Netflix series Squid game is the stuff of nightmares.

If you are one of the millions who have watched the dystopian hit show (Netflix reported on Twitter in mid-October that 111 million viewers had listened to), you know what we’re talking about. And sleep psychologists and physicians who study the dream aren’t surprised if the spectacle creeps into your non-waking hours.

When you watch something that resonates with you (whether it’s because it’s deeply moving or deeply disturbing) it’s going to stick with you, especially if you’ve been watching a lot of the show in a short period of time – and especially if you did it so just before bed, says Michael Grandner, PhD, associate professor and director of the Sleep and Health Research Program at the University of Arizona at Tucson.

â€œYou are immersed in this series and you have invested in the characters. It’s an emotional roller coaster, and your mind has to process it all, â€he says.

Google searches for the term “squid dream” have indeed increased since the show began on September 17, according to data from Google Trends.

So why exactly are we taking this emotional processing to bed with us? Here’s what Grandner and other dream experts say it’s important to know why we dream and, more specifically, why we have nightmares.

RELATED: Why You Have Weird Dreams During the COVID-19 Pandemic

What causes nightmares anyway – and what does the “squid game” have to do with it?

Sleep medicine research has yet to determine precisely why we dream.

In short, theories suggest that our dreams – and nightmares – are our brains that process what we have encountered during the day and memorize certain things, says Deirdre Barrett, PhD, assistant professor of psychology at Harvard Medical School and author of Pandemic dreams, which details common themes recurring in people’s dreams since the emergence of COVID-19.

â€œThe content of our dreams correlates with our daytime concerns, but in this way it appears more visual, more emotional, less linear and less logical,â€ she says.

Research shows that sleep plays a key role in how and why we create memories and store certain information in our long-term memory. And our dreams are supposed to help with that by consolidating memories, processing emotions and doing some mental cleaning, cataloging our thoughts, feelings and memories, according to the Sleep Foundation.

If the information our brain catalogs is painful (like that from a disturbing TV show), then it makes sense that the dreams that ensue are painful as well, Barrett says. Stress and anxiety as well as trauma, substance abuse and lack of sleep are all known nightmare triggers, according to the Mayo Clinic.

RELATED: How to calm a racing spirit and fall asleep tonight

Untreated or repressed emotions can also trigger nightmares. A study published in the journal Dream in 2017 found that people struggling with negative emotions like sadness, fear, anger and anxiety in their waking life caused these feelings to manifest in their dreams, especially if they were repressing these emotions during their hours Eve.

When it comes to unsettling entertainment, Barrett adds that overlapping narratives with real-world anxieties can have an increased effect on our dreams.

To take Squid game. Her themes include feelings of helplessness in the face of debt, the difficulties of being a good parent, and the childhood games we all encountered in the schoolyard.

There are a lot of things out there that could resonate with viewers (like you). â€œThese things are more likely to strike a chord with a lot of people than witches and vampires,â€ Barrett says – and therefore are more likely to disrupt your dreams.

RELATED: Why do you remember – or forget – your dreams

Are nightmares bad for your sleep?

Don’t worry the next time you wake up with a cold nightmare sweating. If you get it every now and then, experts say, it’s normal and probably safe for your health.

If bad dreams, nightmares, or night terrors regularly prevent you from getting enough or good quality sleep, this may be a cause for concern.

Bad dreams and nightmares involve disturbing content, but bad dreams usually seem less real and don’t wake you up. Nightmares, on the other hand, tend to be more vivid and wake you up from your sleep, says Joanne Davis, PhD, a clinical psychologist at the University of Tulsa, who specializes in research into nightmares and sleep problems.

Nightmares usually occur during the rapid eye movement (REM) portion of our sleep cycles. In addition to stress and anxiety, mental health issues (like depression or PTSD) and certain medications can also contribute to nightmares, according to the Sleep Foundation.

RELATED: Are you at risk for severe sleep disorder?

Nightmares are only considered a disorder if you have them frequently (at least once a week for a month) or if they interfere with your sleep, mood, and daytime functioning, according to the Mayo Clinic.

It is up to you to determine how much your nightmares affect your daily life and your health. Some people have recurring nightmares that don’t interfere with their daily life at all, while others may have disturbing thoughts or have trouble falling asleep and staying asleep for weeks because of their nightmares, Davis explains.

â€œSome nightmares are so intense that they prevent people from sleeping together,â€ says Davis. This is a problem, and these people should ask for help.

Night terrors (sometimes called “night terrors”) are an entirely different parasomnia, Davis adds. A person suffering from night terror may show signs of panic or dread in their sleep, ranging from screaming to kicking or kicking. According to the Mayo Clinic, people experience night terrors during non-REM sleep, which means they won’t remember them when they wake up.

â€œWhen people have night terrors, they can open their eyes, move or scream, but there is no awareness,â€ says Davis.

With night terrors, the experience is usually more frightening for the parent or partner sleeping next to you, Barrett says. The person experiencing the terror is not conscious while this is happening, will not wake up or remember it.

If they occur frequently (twice or more per week) or if they cause other problems (such as injury, sleepwalking or sleepwalking), it is worth seeking help from experts in behavioral medicine. some sleep.

What can you do to have fewer nightmares?

Whether or not you have enough nightmares to be classified as a disorder, they can be unpleasant. Try these tips to get less:

This is the obvious. If you tend to have nightmares after watching an episode of Squid Game, Stranger Things, American Horror Story, or other strenuous entertainment, don’t binge watch a few episodes right before bed.

If you can’t stay away, create a buffer zone where you do something or watch something to relax the mood before you sleep, Davis says. She is going to edit an episode of the Great british pastry shop to relax after watching a thriller.

Understand how scary movies and TV shows affect you, says Barrett. For some people, digital media is an escape from their daily worries, while others find the content arouses their anxiety. If you are in the latter group, taking extra precautions to avoid anything that might bother you before bed can help you sleep.

Create a relaxing atmosphere for sleep

We’re not just talking about making sure your bedroom is dark, quiet, and the right temperature. Sleep hygiene also involves creating a peaceful space for your mind, says Grandner.

Decide if you need to spend some screen time reading a book (as long as it’s not Stephen King!), Meditating, or journaling. Soothing pre-sleep routines prepare your body and brain for good sleep.

RELATED: How to set your sleep schedule and sleep more soundly

Imagine what you would like to dream of instead

Since what you think about before bed will seep into your dreams, consider changing the “channel” in your head. Rather than falling asleep ruminating on the plot of a disturbing TV show, focus on something pleasant that you’d like to dream about. Barrett calls it â€œthe dream incubationâ€ and his decades-old research suggests it works about 50% of the time.

‘Fall asleep saying,’ I want to dream of this.â€œIt’s just a nice way to fall asleep, even if you don’t remember the dream that happened,â€ she says.

Get professional help if you need it

Grandner and Davis agree that there are many resources available to help those struggling with nightmares. Davis, for example, developed Exposure, Relaxation, and Rescripting Therapy (ERRT) for trauma-related nightmares. It is a mixture of cognitive behavioral therapy (CBT) and image repetition therapy (IRT), and clinical practice guidelines recommend its use for the treatment of nightmarish disorders.

With ERRT, the patient talks about their nightmare, identifies what is scary or uncomfortable about it, and rewrites the dream narrative, Davis explains. Then they practice imagining the new dream during the five-week workshop.