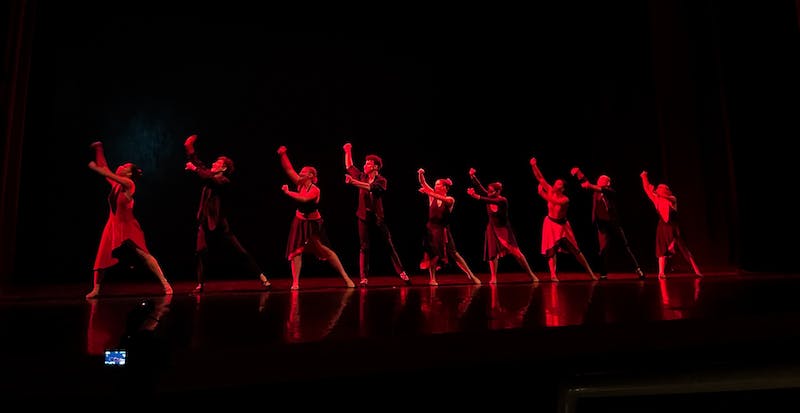 “My career has been a quest, a search for roots,” says the narrator, his voice filling the auditorium with the words of dance pioneer Pearl Primus to begin “Walking with Pearl,” the show’s first dance.

On an orange background, reminiscent of the foreground of “The Lion King”, the room fills with the sleepy sounds of nature, the narrator and finally a harp.

The dancers – all dressed in orange costumes – perform different movements. Yet somehow the Zodiac Dance Company manages to make these varied movements feel in sync.

Zodiac made its return to in-person performances at UB’s Center for the Arts this weekend, presenting three shows from October 16 to 17. The show was split into two acts between the CFA Drama Theater [Act 1] and the CFA Mainstage Theater [Act 2] and consisted of nine separate performances.

This was the company’s first in-person show since March 2020, so the group were eager to return to the stage after leading their practices on Zoom over the past year. Although participants and performers were required to wear masks, Kerry Ring, artistic director of Zodiaque, described a sense of accomplishment for the group as a whole as they weren’t bothered by the insignificant difficulties of wearing. a fabric face cover.

“This semester is kind of a celebration because we have no barriers, we can touch the dancers,” Ring said. “Although we are still masked, we are in a much more familiar situation where members of the audience participate and we can be in a space together without this distance.”

For students like business administration and dance graduate Kyle Kerschner, being able to perform in front of a live audience is a luxury that has been sorely missed.

“It’s been this big change, but we’re so excited because there’s really nothing quite like dancing live, and that’s why a lot of us dance,” Kerschner said. . “The feeling of being on stage with each other in the community, the close bond between us and that extra motivation. It’s almost indescribable.

For others, like sophia fino, a sophomore dance major, the show marked their very first performance live and in person at UB.

“It was really hard [last year] because we were completely virtual and distant, dancing in our rooms and dorms, ”Fino said. “So it’s like a whole different world this year. ”

Auditions began just three days after the start of the semester for the company’s 47th fall concert. Once the dust settled, 25 members were selected to participate and thus began the tireless ordeal of mastering the choreography in less than two months. The company met an average of four times a week, with each dancer responsible for three performances.

The second performance, “If You Ever Need Me,” opens with another sweet line from the narrator, as he invites participants to “imagine a night when you can’t sleep”.

The spectrum has covered the University of Buffalo since 1950, your donation today could help #SaveStudentNewsrooms. Please consider donating today.

With a jazzy piano and a pair of friends in their pajamas, the duo find themselves on a journey fueled by anxiety that interferes with sleep.

Anna Boyd, an MFA sophomore dance student, choreographed the show and was forced to adapt her first live show so she wouldn’t be embarrassed by the masks.

“Trying to communicate with masks is a little weird because I do a lot of styles of jazz musical theater that require a lot of storytelling, which usually happens by [showing] the face, ”Boyd said. “So we focused a lot on very broad body gestures to get the message across. But it’s much easier now to teach in person rather than Zoom. “

As the pair hug their pillows for a variety of dances, their pink-red pajamas are amplified by the background dancers, all of whom wear black. As they happily celebrate the night, they finally start to move away so their anxious friend can finally rest, before a final bow with a pillow.

“I would say that the theme [of the story] is about sharing your time generously with your friends, ”Boyd said.

Alissa Dabrowski, a theatrical performance major, said that “If you need me I’m probably standing” was one of her favorite performances of the day and was pleased with the results of the show.

“It was great to be back,” said Dabrowski. “I’ve been waiting for live shows for so long and just the feeling of being surrounded and seeing their first show, it’s just a great experience overall.”

Finally, the first act ended with “ki / net / ik”, a fast paced techno performance straight out of the 80s, with brightly colored lights.

Fino, who performed part of this dance, described the futuristic imagery, sounds and robotic movements as a representation of “the potential of what we might become as superhumans and then dive back into our old selves.”

As the dancers begin to cover the dark floor, brightly colored lights and sounds reminiscent of sci-fi movie soundtracks raise the red-clad cast, effortlessly flowing to a heavy breakdancing rhythm, evoking the sounds and feel of songs like “Mr. Roboto.

At the end, the music and lights slowed down sharply, evoking memories of “The Matrix” as the dancers slowed down to match the beat before culminating in a frozen finish. As the lights went out like a television turned off, a sense of reality returned as the company bowed and nodded, which was greeted with cheers from the audience.

After a brief intermission, attendees were directed to the Mainstage Theater for the second act, with a larger stage paving the way for increasingly grandiose performances.

Act 2 easily kicked off the most unorthodox performance in the series, “Ffleting and Unfolding.”

Instead of a live performance, this video segment featured a montage of shots where the dancers frolic in the sand and use their hands and feet to create “Midsommar-esque” patterns on the floor as the music darkens. was starting to play.

From start to finish, it was very clear to the audience that while the different dances had little in common in terms of technique, they all shared a high level of creativity, ensuring constant variety for all participants.

“It is not a tale that tells a single story, but many different little experiences for an audience member, and which gives the dancers a great place to flex their muscles and all the different styles that are provided by these different choreographers. , “Anneau said.” We want the dancers to be versatile in what is presented and the audience to be ready for a versatile experience as well. “

“Fandango” was easily one of the most thoughtful dances of the night and represented a journey into surreality, where dark red lights shone ominously over the dancers in much the same way as the cover of Phoebe Bridgers’ latest album, “Punisher”.

Opening to a red-lit solo dancer, the colors of the light varied throughout the symphonic performance, the background changing frequently, highlighting designs similar to playing cards, continuously evolving with the lights and the changing number of dancers, before ending with a singular dancer, just like it started.

But the public was fooled.

It wasn’t over yet.

The dancers resurfaced, with the dark red light. Romantic Spanish music complemented the dancers perfectly throughout “Fandango”, but the bright finale led by a disco ball ensured a slew of applause and cheers from the attendees.

Theo Qu, a senior dance major, performed in “Fandango,” and said he appreciated the hard work and the rewards that come with working with such a dedicated team.

“It pushes our limits, both mental and bodily,” Qu said. “It’s a rewarding process because we learn the mindset of the choreographers and, at the same time, we learn to take instructions on stage and learn the materials quickly.

To crown the second and final act, the pillar “Z’Bows”, a dance performed annually that acts as a mark of appreciation for everyone involved in Zodiac, including performers, choreographers and the audience.

Thomas Ralabate, the former director and alumnus of the Zodiac Dance Company in the 1970s, led “Z’Bows” for nearly a decade, maintaining the same bows each time, while the performances vary.

“It’s a different piece of music this year because we’ve had copyright issues since we’re also broadcasting,” said Ralabate. “But it’s a standard bow, and it works from year to year, the only thing that changes is the membership of the company.”

This year’s edition was lit by a sparkling disco ball as the dancers performed their final moves. As the synths and basses roared through the heavy techno dubstep beat, the band felt more together than ever as they happily provided their last dance of the show before bowing to a standing ovation of nearly a minute. .

At the end of the show, the audience was released into the atrium of the CFA, where they met the dancers after the show to congratulate them, some as family and others as friends.

“It’s always a relief that we experienced it in a safe and healthy way, without injury and with large crowds,” Ring said after the final show. “It was such a wonderful energy throughout the weekend. People were thrilled to see the performances live again, so we felt him both sitting in the audience and backstage. “

Alex Falter is the Arts Editor and can be contacted at [email protected].